Drosera scorpioides, a self-incompatible pygmy Drosera. You need to cross two different clones to get seeds from the flowers.

Self-incompatibility is found in probably half of the Drosera species. Chen et al. (1997) did a detailed study of self-incompatibility in a selection of Drosera species from Western Australia. The two pygmy SI species they studied, Drosera enebba and Drosera mannii, showed the site of incompatibility to be in the stigma. That is self pollen placed on the stigma started to grow but was killed before it got very far. However the site of incompatibility for the 14 tuberous SI species/subspecies were all over the place: 4 on stigma, 5 in stigma, 1 upper mid-style, 3 mid-style, 1 lower mid-style, 1 placenta, and 1 near ovule. I was astonished to see Drosera auriculata listed as SI in their study. The plant they studied could have been what is now called Drosera yilgarnensis and it is possible there are SI populations of Drosera auriculata.

For carnivorous plant enthusiasts, self-incompatibility is a serious problem for the production of seeds if for instance all the plants you have are clones of the same plant. This also presents a serious problem to plant species in nature since SI limits dispersal of a species over long distances. If one seed of an SI species makes it to a new locality, it is essentially doomed not to reproduce while all it takes is one seed for a self-compatible (SC) species to colonize a new locality. This restriction on the ability SI species to establish colonies can result in extinction as continents move, climates change, and local disasters occur.

The decreased ability of SI species to form distant colonies results in most if not all SI Drosera being locally endemic. That is they are found only in small geographic areas. All it takes is a corporate wheat farm to come into production to wipe out a whole species. Whereas self-compatible species tend to be found across larger geographic areas and many are found on different continents and/or islands. An SC species may lose local populations but the species will continue.

So why is self-incompatibility so common among flowering plants? One reason is SI species appear to have a higher rate of speciation. Small SI populations can have as much genetic variation as a large, dispersed SC population. The SI species with small populations in a limited ecological range can quickly develop localized characters taxonomists use to distinguish species. So a human studying a group of species may distinguish a dozen different types and name them as species. But they all may be able to interbreed when grown together and be fertile and self-incompatible like their parents. This is no different from a single large widespread SC species with multiple ecotypes but no obvious taxonomically distinguishing characters. In other words the count of SI vs. SC species may be biased depending on the definition of "species".

In plant families where self-incompatibility is found today, it is generally considered to be ancestral to the family. This is because we have no examples of self-incompatibility evolving within families or at any level where we can study that process. We do not know how the two SI systems (SSI and GSI) evolved or how many times each evolved independently. The systems work in very complicated ways and it is hard to see how to get there from anywhere else. In phylogenies where the systems have been studied in sufficient detail they find related genera (e.g. petunias and tomatoes) with the same exact genes involved in SI but once that SI system is lost in a clade, it is not regained. This is also what we see in the Caryophyllales carnivores.

Within the Caryophyllales carnivores we have two examples of SI and thus presume the progenitor of this group was SI. The most obvious example is the numerous Australian Drosera exhibiting SI. The other example is Nepenthes; not Nepenthes itself but the likely mechanism for production of dioecy in polyploids is to start with SI parents. See the Nepenthes phylogeny for more info. For these reasons I traced the red SI line in the figure below from the outgroup to where each clade converted to a non-SI mating system. In most of the cases in Drosera, the resulting self-compatible species also self-pollinate. That is the case with most of the species linked with the green lines. Some species are capable of producing viable seed from self pollen but have evolved mechanical ways to limit self-pollination. Those species are shown linked with blue lines.

Three species are shown with dotted lines indicating some populations of those species are SI while others are SC. Drosera indica, Drosera binata and Drosera peltata are actually multimorphic species or species groups depending on your point of view. The founder of the species was probably SI but individual populations have become SC following SI breakdown. At this point it is not known if SI/SC tracks certain forms of each species or is independent of taxonomic status. Each of these species is widespread and SI is generally limited to populations in Australia and Tasmania. 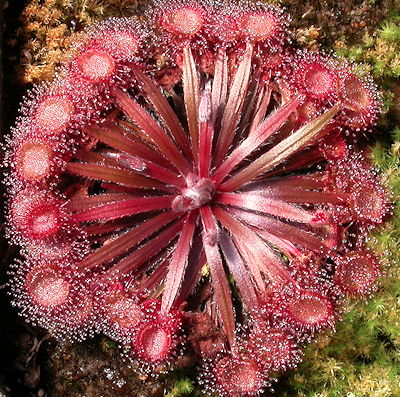 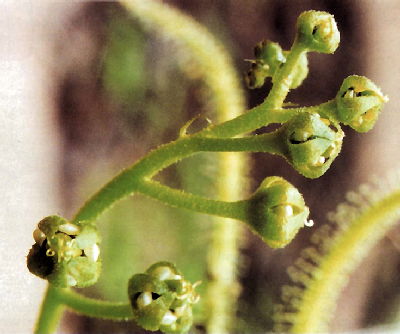 Female flowers from a population of Drosera indica near Narrabri, New South Wales, Australia. This population appears to have developed sexual dimorphism with functionally female flowers and hermaphroditic flowers. The hermaphroditic flowers have autonomous self-pollination. This would be an interesting population to study the evolution of sexual dimorphism in plants. Photo by Robert Gibson, Carniv. Pl. Newslett. 31(1):22 ( PDF ) .

The following list of SI and SC species is not official. It is based on my experience, correspondence with other growers, postings on-line, and publications. If you have any corrections, please contact John Brittnacher, .

Phylogenetic tree from Drosera evolution page showing the presence of different mating systems in the Caryophyllales carnivores. In self-incompatible plants the female part of the flower kills the pollen with the same genotype as its own to avoid self fertilization. Self-compatible plants are capable of inbreeding. Dichogamous plants have flowers that mature their sexual parts at different times to decrease the probability of inbreeding. Dioecious plants have either male or female flowers and are incapable of inbreeding.

Gibson, Robert (1999) Drosera arcturi in Tasmania and a comparison with Drosera regia. Carniv. Pl. Newslett. 28(3):76-80 ( PDF ) (Observations on pollination of D. arcturi in nature that are compatible with selfing.)

Observations by Andreas Fleischmann indicates D. stenopetala is self-compatible and some D. indica populations are self-incompatible.

Based on numerous observations reported on Internet forums it appears D. hamiltonii is self-incompatible. The plants have large showy flowers typical of SI species and there are no reports of getting seeds from selfed flowers.