Evolution of the Oxalidales Carnivore

Until the advent of molecular phylogeny, plant taxonomists had no clue where Cephalotus follicularis fits into the tree of life. The most common guesses were that it was related to Sarracenia and Nepenthes (as if they are related!) or to the Saxifragales where Drosera was once thought to reside as well.

Thanks to DNA sequencing we now know Cephalotus is in the order Oxalidales (oxalis) and not related to any other carnivorous plant. It ties in at the root of the Oxalidales and has as sisters 5 families with over 1900 species in 60 genera, most of which you have never heard of. The family Cephalotaceae has one genus with one species. For Cephalotus does a family tree like that fit the definition of orphan?

Genetic relationships of the plant families in the order Oxalidales based on two chloroplast (rbcL, matK) DNA sequences and one mitochondria (matR)DNA sequence from the NCBI taxonomy database.

The DNA sequence data do not provide adequate resolution to show additional hierarchy. That means none of these families in the Oxalidales appear to be closer to Cephalotus than any other. The display order of the branches is arbitrary. I put them in this order because the leaf structure of the Oxalidaceae and Connaraceae is similar to the Cephalotus ancestral leaf structure. (Whether the family Huaceae should also be in the Oxalidales is debatable and not shown in the tree.)

The number of genera and species listed in the figure to some extent is a matter of opinion, but the numbers and geographic range give a good idea of the size and diversity of the families related to Cephalotus. Four of the six families are found in Southwest Australia where Cephalotus is found. The Elaeocarpaceae, Cunoniaceae, Brunelliaceae, and Connaraceae are generally evergreen shrubs. The Oxalidaceae consists mostly of herbaceous plants in the genus Oxalis but the family also contains some shrubs and small trees in other genera.

There are indications from fossils and models of molecular clocks that the split among the families of the Oxalidales occurred 80 to 100 million years ago when landscapes were dominated by gymnosperms and the angiosperms where just beginning to diversify. If the progenitors of all these families became distinct within a ten million year period 100 million years ago, there may be no way to sort out the relationships better than this. That is because there would be so few preserved DNA changes during that short period compared to the number of changes since then. 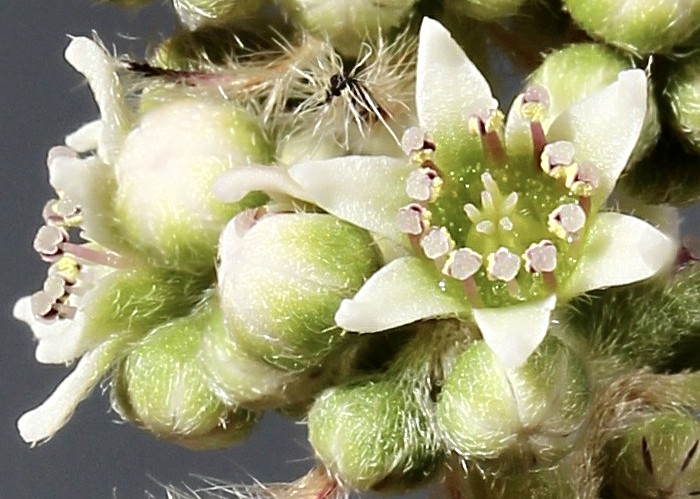 Within the order Oxalidales, the Oxalidaceae and Connaraceae have compound leaves. The species in the other families tend to have simple leaves. Leaf structure says more about the environment where the plants are found than their heritage. The same goes for flowers. Plant/pollinator interactions determine large scale aspects of flowers such as petals and colors. Cephalotus appears to have ancestral-like flowers and it may have the same pollinators it had 80 million years ago. Some of its relatives appear to also have ancestral-like flowers. That does not mean those relatives are the nearest relatives.

There has been a long discussion in the literature about how the pitchers of Cephalotus are constructed. Plant anatomists have been staring at and slicing and dicing the pitchers since the middle of the 19th century. On a general inspection the pitchers are as elaborate as any Nepenthes pitcher. But more detailed inspection showed that the pitchers are not your folded simple leaf like with Sarracenia and Nepenthes. Lloyd (1942) and DeGreef (1990 PDF) summarize the studies demonstrating this and discuss the results under the assumption Cephalotus is a member of the Saxifragales and proto-Cephalotus had a peltate saxifrage-type leaf. 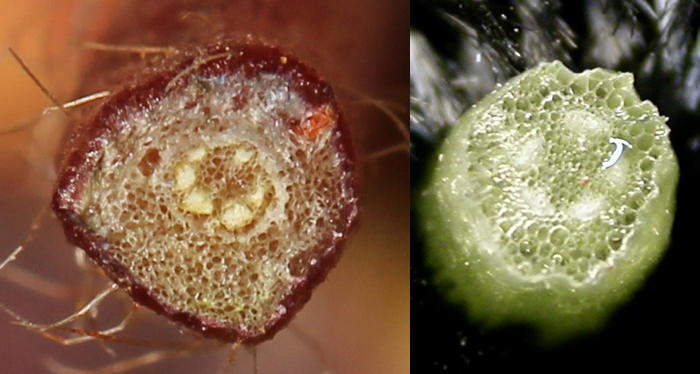 Left: Cross section of a Cephalotus leaf petiole showing the circular arrangement of vascular bundles. The flat side of the petiole is the lid side. Right: Cross section is of an Oxalis triangularis leaf petiole. This is typical of peltate leaves where the petiole joins the leaf near the center. Notice how the Oxalis triangularis has five bundles while Cephalotus has six. This mirrors the situation with the flowers.

Evidence that Cephalotus is derived from a peltate leaf is the arrangement of vascular bundles in the petiole. In a typical simple or flat leaf the bundles are arranged in an arc. In Cephalotus they are arranged in a circle exactly like Oxalis leaves except Oxalis has one fewer bundle. Curiously you can also take an Oxalis leaf and easily fold it into a pitcher. To make a Cephalotus pitcher requires some stretching. The lid would be one leaflet. The other leaflets would be stretched around to become a pitcher. The leaf ridges that act as prey guides would be at the sutures between the pitcher leaflets.

Two views of a developing Cephalotus pitcher. The pitcher is a severely modified, Oxalis-like peltate leaf. The three "prey guides", one on the front and one on each side of the pitcher, are likely leaflet sutures. The tip of the leaf is where the three prey guides and the front of the lid come together opposite of the petiole attachment. There are also leaflet sutures between the side back segments and the lid segment although they are not as prominent. It is possible the front guide is actually two sutures with a leaflet remnant in between. With the front prey guide being a leaflet remnant, that makes six leaflet segments. Six segments would also match the number and position of the vascular bundles in the petiole. However if the front prey guide is a flared suture, you could also play the same game with a typical Oxalis leaf that has three partially divided leaflets. This would make the lid one leaflet and the sides each one leaflet. There is evidence for this interpretation in the photo of an aberrant pitcher by RL7836. However, other numbers of leaflets with and without divisions also work to explain the Cephalotus pitcher.

These physically superficial similarities but basic differences between Oxalis and Cephalotus are consistent with them being in separate but related families as shown by the DNA sequences. It is not possible to determine what the common ancestor looked like because all the other families in the Oxalidales have simple leaves. Eighty million years is plenty of time for the progenitors of Cephalotus to develop their own peltate leaf style and then have that evolve into a pitcher. 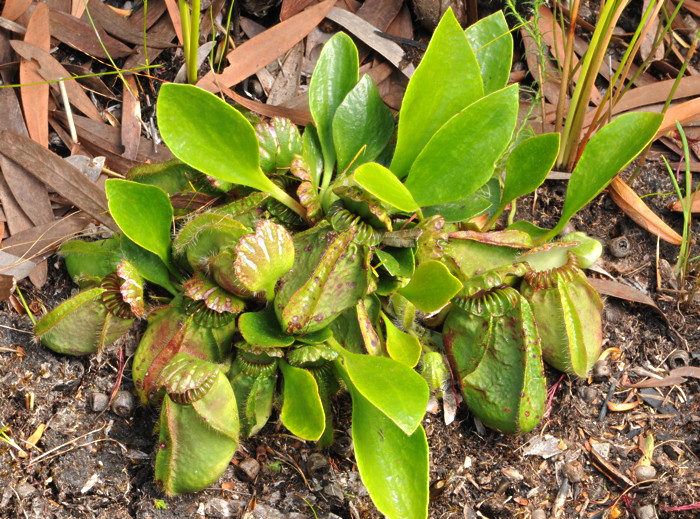 Probably the biggest impediment for some people to understand Cephalotus pitchers is the simple, non-carnivorous leaves the plant produces seasonally. They are essentially expanded petioles and extremely unlikely to be representative of ancestral leaves. The simple leaves are produced during the winter when presumably there are not enough prey available to make production of pitchers advantageous. They also tend to be more common on shade grown plants. The occasional aberrant leaves we see more than likely happen when the development pathway to produce pitchers kicks in after the leaf has started to grow and it is too late for that leaf to make proper pitchers. The structure of the aberrant leaves is totally consistent with the peltate nature of the trapping leaves and an ancestor with Oxalis-like leaves.

Keep in mind each author states their view at a given time with the data they have at that time. Recent discoveries could modify their ideas. 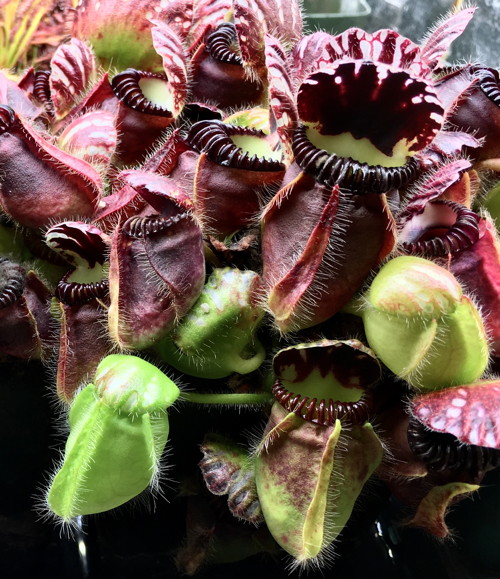 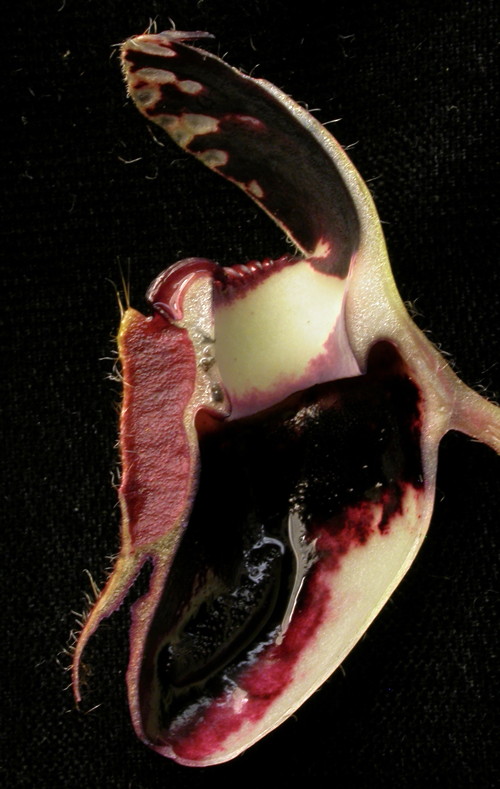 Longitudinal section through a Cephalotus trap. 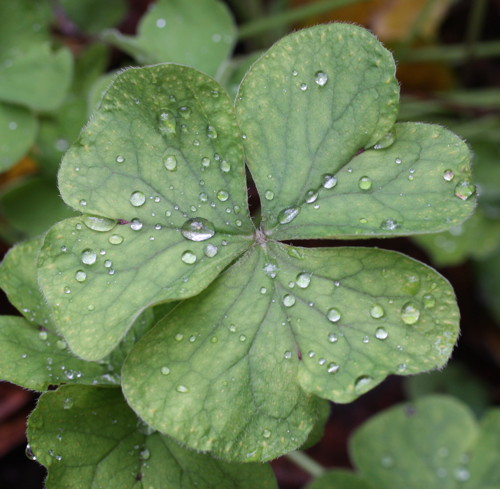 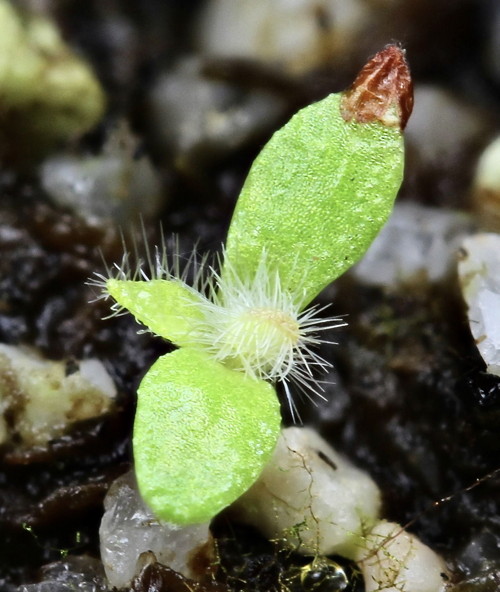 Cephalotus sprout showing a unifacial phylodia as the first true leaf and a pitcher as the second true leaf. This aspect may be variable. 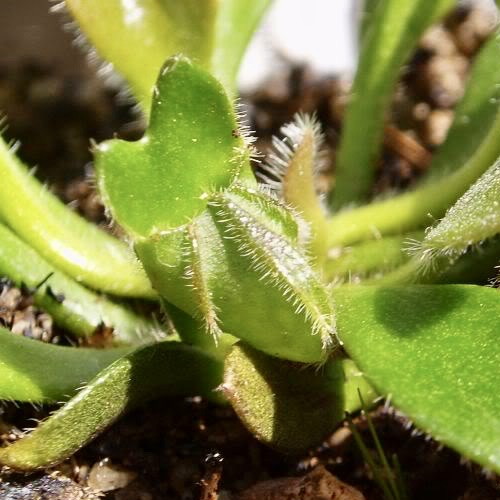 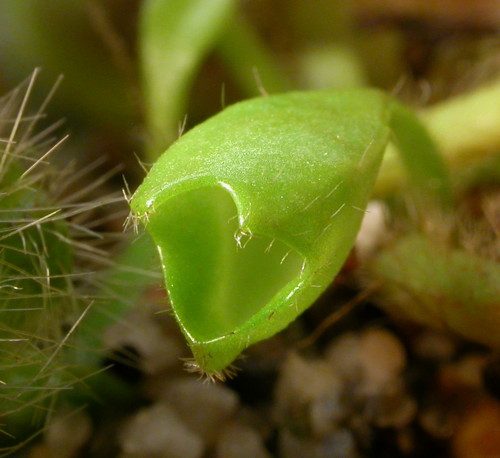 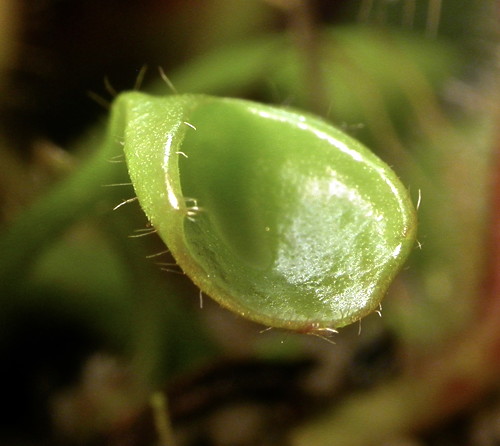