What are Carnivorous Plants?

What is so special about carnivorous plants that a society with over a thousand members exists to share information about them?

Carnivorous plants are predatory flowering plants that kill animals in order to derive nutrition from their bodies. They share three attributes that operate together and separate them from other plants.

To put it in more human terms, carnivorous plants eat things like insects, spiders, crustaceans and other small soil and water-living invertebrates and protozoans, lizards, mice, rats, and other small vertebrates. Carnivorous plants pull off this trick using specialized leaves that act as traps. Many traps lure prey with bright colors, extra-floral nectaries, guide hairs, and/or leaf extensions. Once caught and killed, the prey is digested by the plant and/or partner organisms. The plant then absorbs the nutrients made available from the corpse. Most carnivorous plants will grow without consuming prey but they grow much faster and reproduce much better with nutrients derived from their prey. 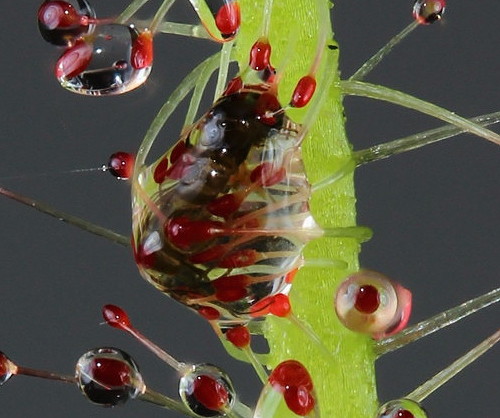 We do not call these plants "insectivorous plants" because no self respecting carnivore is going to check the ID of a potential prey to make sure it is an insect. Some carnivorous plants do specialize in capturing insects, but they will consume whatever they can.

Not all plants that trap or kill animals are considered carnivorous. Some Aroid and Aristolochia species capture insects in their flowers to facilitate pollination. They don't kill the pollinators and if some of the pollinators do die in the flower it is not to the advantage of the plant. Carnivorous plants never use their flowers as traps.

Because this is nature, there are a lot of cases where it is unclear to us whether a plant is a true carnivore or just has some of the features of a carnivore. Until recently it was thought the three species of Devil's Claw in the family Martyniaceae are carnivorous. Ibicella lutea, Proboscidea louisianica, and P. parviflora are large plants that typically catch some small flies. They are now considered non-carnivorous because they do not derive much if any nutrition from the prey. They probably have sticky leaves as a predator defense. There are many other types of plants with some features of carnivorous plants where it is even more difficult to argue they are true carnivores. If these plants kill non-plants in an obvious, body present, way but do not derive significant nutrition from the victim, they are considered murderous plants.

Another plant that has generated a lot discussion about what it takes to be a carnivore is Roridula. Roridula rely on assassin bugs to perform the digestion of prey. The plant captures the prey. The bugs suck out the juicy insides of the prey and defecate on the leaves. The plant absorbs the nutrients in the poop. If the assassin bugs are not present there is a fall-back for the plant but it is unclear how much this fall-back is used in the wild. Bacteria in the gut and on the prey can digest the dead prey and Roridula leaves will absorb the nutrients released quite efficiently. 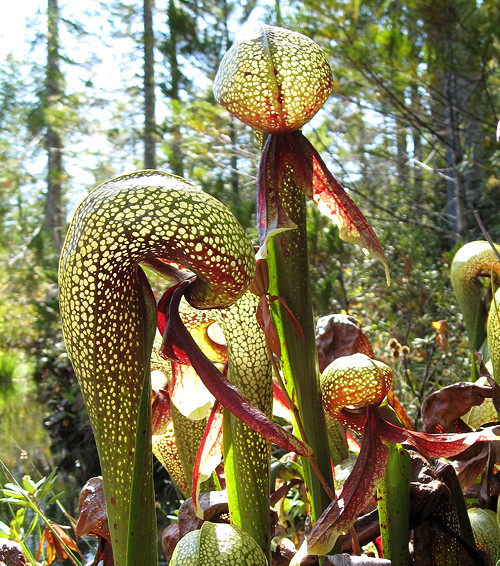 Darlingtonia californica in Del Norte County, California.
Notice how the hood of the pitcher creates a trap for insects attracted to light.

Darlingtonia and some Nepenthes species have also lost the ability to digest prey themselves. These species rely on bacteria and other organisms to make the nutrients in the prey available to themselves. To put it unscientifically, why should a plant go through all the bother of digesting the prey itself when other organisms will do it for them? Or scientifically, if there is no selective advantage to expending the energy for digestion, mutations will accumulate eliminating digestion. It should be obvious here we have carefully crafted our definition of carnivory to include these plants as carnivores and to exclude purely murderous plants.

If the plants or their story is sufficiently bizarre and their very closest relatives are definite carnivores, we may bend the "rules" a bit to allow them into the club. No one has claimed the toilet bowl Nepenthes species are not carnivorous. The toilet bowl Nepenthes primarily use their traps to attract animals and collect their excrement as they feed on nectar produced by the plant or in the case of Nepenthes lowii, snail eggs laid on the lid. Carnivorous plant enthusiasts go nuts over these plants and could not care less about definitions. 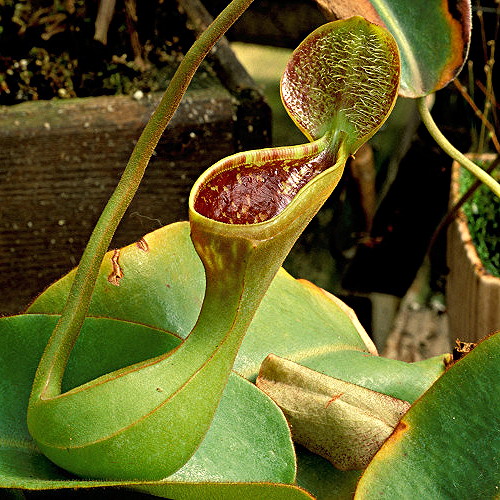 Nepenthes lowii is one of the toilet bowl Nepenthes. It is found in the wild on high mountains in Borneo where tree shrews perch on the pitcher and eat snail eggs laid among the hairs of the upright pitcher lid. While sitting there, shrews do what shrews do.  Photo © Barry Rice, sarracenia.com.

For a more detailed discussion please see the following books and web pages.

McPherson, S.; Edited by A. Fleischmann and A. Robinson. (2010) Carnivorous Plants and Their Habitats: Volume 1 and Volume 2. Redfern Natural History Productions Ltd., Poole, GB.
(This is basically one 3.6 kg, 1442 page book published in two volumes. From the review by Bob Ziemer in CPN 40(1)35: Carnivorous Plants and their Habitats is an outstanding encyclopedic work that covers the ecology, diversity, and natural history of each carnivorous plant genus in great detail. Each genus chapter is a self- contained treatise with the headings: Distribution, Botanical History, Plant Structure, Habits and Ecology, Traditional Uses, Associated Life, Cultivation Requirements, Conservation Status.) 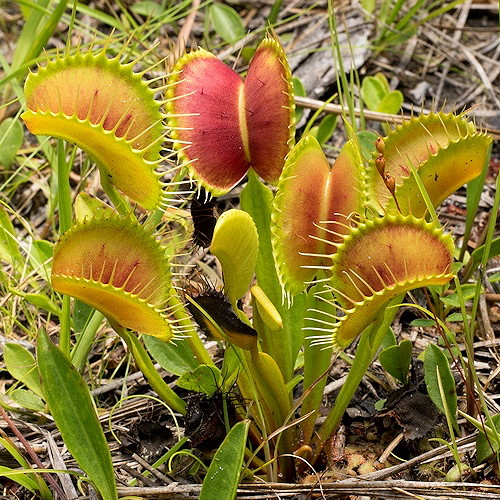 Undoubtedly the most familiar carnivorous plant is the Venus flytrap, Dionaea muscipula. This plant is in Pender County, North Carolina. In spite of its name, the majority of what VFTs eat in the wild are beetles so do not expect it to help much with catching flies.  Photo © Barry Rice, sarracenia.com. 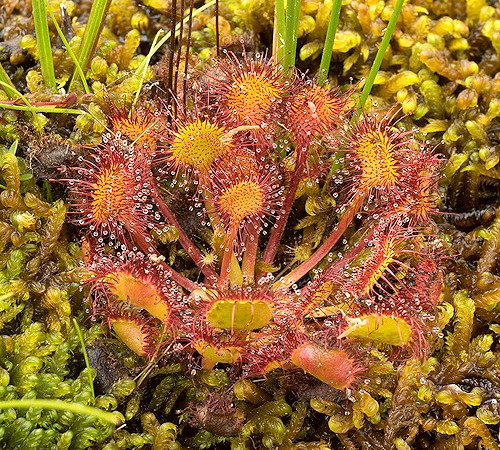 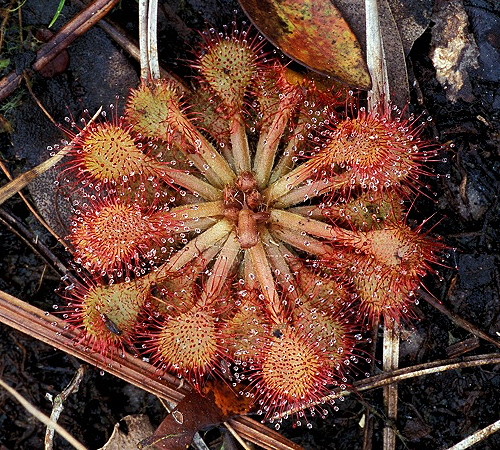 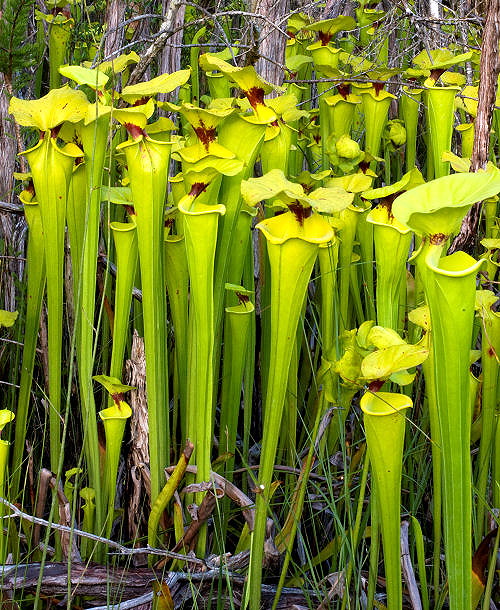 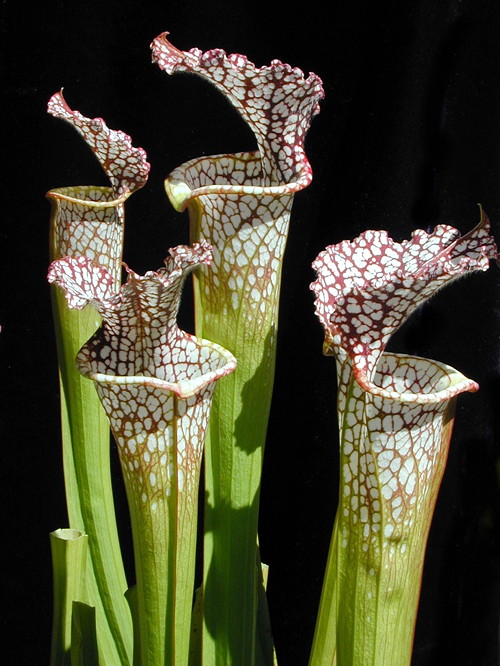 Flowers or leaves? Good question. These are the traps of Sarracenia leucophylla. Many a moth thought these were flowers too and ended up as dinner. All carnivorous plant traps are constructed from leaves. 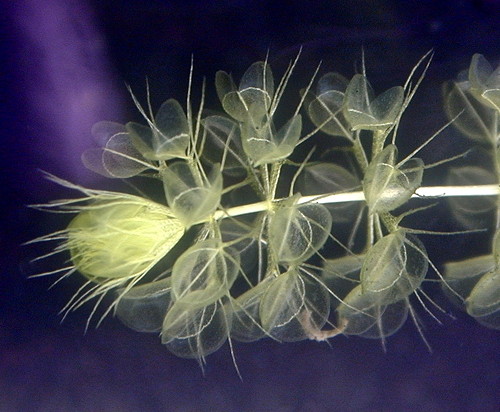 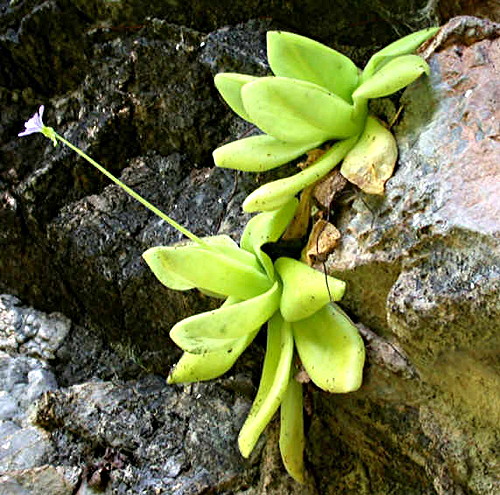 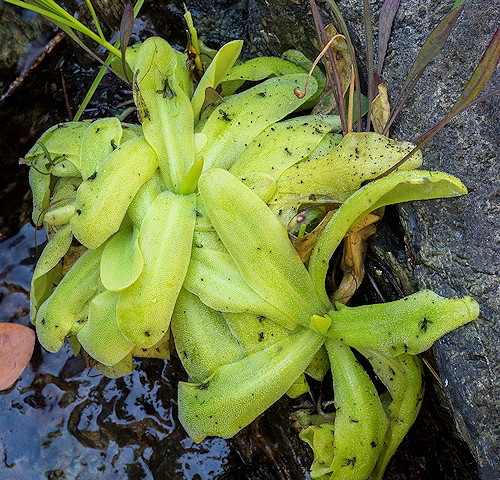