There are other part time carnivores besides Triphyophyllum. Many Sarracenia species and a few Drosera species are part time carnivores as well. And we are not talking about the numerous carnivorous plants that have special leaves or structures to survive cold winters or dry summers. S. flava and S. oreophila produce their pitchers in the spring and pitcherless leaves called phyllodia in the summer. S. leucophylla produces pitchers in the spring and fall and may produce phyllodia in the summer. S. rubra subsp. rubra makes almost pitcherless leaves that lay on the ground in the spring and fully functional pitchers in the fall. Drosera arcturi at times produces leaves with few or no tentacles. D. schizandra may produce leaves with so few tentacles as to make one wonder if it is really carnivorous. There are other examples.

Then we have the carnivores that hedge their bets all the time. Nepenthes has large leaf petioles for direct photosynthesis since the pitchers perform little if any photosynthesis. If the temperature is too warm or too cold, the soil too dry, or plant is has been fertilized too much, Nepenthes plants abort production of traps on new leaves and live like a normal plant. Aquatic Utricularia uses its stems for photosynthesis and they can become rather leaf-like. Terrestrial Utricularia and Genlisea with their underground leaves develop leaf-like protuberances above ground for photosynthesis. Are these plants cheating or what? As any crook will tell you, they are just trying to make a living.

When we talk about the costs of carnivory we are not talking about the admission price for a plant to be a carnivore. We are instead comparing energy budgets and adaptation tradeoffs for carnivorous and non-carnivorous plants. For typical plants the inputs are things like soil nutrients, water, and sunlight and the outputs are growth or roots, leaves, and stems and production of flowers and seeds. With carnivorous plants we have an additional input of prey and leaf outputs can be regular leaves and trapping leaves. Adaptation tradeoffs would include adaptations for carnivory that otherwise adversely affect normal plant functions. If it was a simple matter of allocating resources to trapping prey or not trapping prey this topic would be pretty boring. It is not because in many ways carnivorous plants are crippled.

Very few carnivorous plants have normal roots. Genlisea, Utricularia, and Aldrovanda have no roots at all. In these species stems and leaves can take over the function of roots. Dionaea, Pinguicula, and most Drosera have a few, weak roots. The function of what roots they do have is to anchor the plant and suck up water. Drosera binata with long, thick roots is adapted to anchoring the plant and reaching water in sandy or rocky habitats. Sarracenia, Darlingtonia, Heliamphora and Nepenthes have root systems that are typical for wetland plants although they are much shorter and less branched than would be expected for a plant of their size. The roots have adaptations for surviving in soils lacking oxygen and are structured for transporting large amounts of water to the leaves and not for nutrient absorption. It is reported that Darlingtonia is insensitive to soil nutrients. In the wild the plants are typically found growing in soils containing toxic levels of metals. Similarly a number of Nepenthes species are found in either toxic or saline soils. These plants have limited ability to absorb essential nutrients from the soil.

A second way many species of carnivorous plants are crippled is their traps are not very good at photosynthesis if they can do it at all. The traps of Genlisea, Utricularia, and Nepenthes tend not to be photosynthetic. The traps of Sarracenia, Heliamphora, and Darlingtonia have large leaf areas but they are not oriented to the sun. They are oriented to trapping prey. The leaves of Dionaea and Drosera decrease or lose light orientation when they have trapped a prey. That most of these genera use large petioles or leaf-like protuberances for additional photosynthesis shows they can't live without the sun and have the flexibility to allocate resources for trapping or for light. You could argue that this sort of crippling is self inflicted and in many ways it is. Evolutionarily, for a species to trade off photosynthesis for trapping prey, there must have been strong selection to do so at every step of the way; proto-traps or incomplete traps had to be better than no traps at all. This leads to interesting trade-offs for energy allocation.

Karagatzides and Ellison (2009) did a study to test how certain carnivorous plants invest resources between various parts of the plant and the photosynthetic return they got on those investments. In general they found carnivorous plants tend to make less expensive leaves than most plants. The average is about 20% less glucose to dry mass than is typical for non-carnivores. Of course there are exceptions such as Sarracenia purpurea. Most Sarracenia species have leaves that lasts 3 to 6 months while S. purpurea leaves last more like 18 to 24 months so it isn't surprising the plant invests more in them than other Sarracenia. The carnivorous plants they tested also tended to invest less in traps than in their purely photosynthetic leaves. At first glance we may think the traps must be expensive because they are elaborate. In fact they can have fewer cell layers and they have large areas of the trap, if not the whole trap itself, without the expensive machinery of photosynthesis. Even with the lower investments in their leaves than are typical for non-carnivores, they found carnivorous plants to have very long payback times from photosynthesis compared to non-carnivores. The payback times for non-carnivores are on the order of weeks while for carnivores the payback times are on the order of months. This reflects the lower photosynthetic efficiency of the trapping leaves.

Adamec (1997) has a nice review discussing trade-offs between nutrition from prey and nutrition from more typical sources such as soil or water. Summarizing a number of papers, Adamec classified results for terrestrial carnivores into three groups. The "nutrient-requiring species", Pinguicula vulgaris, P. alpina, P. lusitanica, Drosera adelae, D. aliciae, D. capillaris, D. capensis, D. rotundifolia, D. intermedia, and Sarracenia flava increased their growth with increased soil fertility and from foliar feeding (insects or fertilizer). Root nutrient uptake was stimulated by leaf feeding in some species indicating there are certain soil nutrients the the plants can not utilize efficiently without supplements absorbed on the leaves. Plants of other species on optimal soil could also be negatively affected by trapping insects. This group tends not to reutilize nutrients from old leaves. A second group, "root-leaf nutrient competitors", Drosera whittakeri, D. binata, Pinguicula villosa, and probably Drosera erythrorhiza are able to utilize both leaf and root nutrients but there is no enhancement and there may be limits to absorption on both leaves and roots. This group does reutilize nutrients from old leaves. A third group, "nutrient-modest species", Drosera closterostigma and to some extent Dionaea muscipula are not able to utilize soil nutrients. These species rely on leaf uptake for nutrients. The nutrients that all of these plants were targeting at both leaf and roots were nitrogen (amino acids, ammonium, and nitrate) and phosphorus (phosphate). Potassium did not seem to be critical.

When comparing greenhouse studies with studies of terrestrial carnivores in the wild, Adamec (1997) and Karagatzides and Ellison (2009) concluded that plants in the wild are very dependent on trapping prey. Without catching prey, plants in the wild can have trouble reproducing. And the quantity of prey caught needs to compensate for prey robbed from the traps or washed out of them. Plants living in captivity have an easier life and many species can do quite well without prey or at least with fewer prey than plants in the wild.

Adamec (1997) also reviewed nutrition research on aquatic carnivores. The papers on nutrition for aquatic carnivores showed that they relied very heavily on trapped prey for the necessary nitrogen and phosphorus compounds but need high levels of organic compounds in the water to grow well. Without prey they could survive and grow at very low levels. To reproduce they needed prey. They are found in environments with low levels of nitrogen and phosphorus compounds in the water where other aquatic plants that require higher nutrient levels would not be able to grow.

Adamec, Lubomir and Karla Dusakova and Marcela Jonackova (1992) Growth effects of mineral nutrients applied to the substrate or onto the leaves in four carnivorous plant species. Carniv. Pl. Newslett. 21(1-2):18-24 ( PDF ) 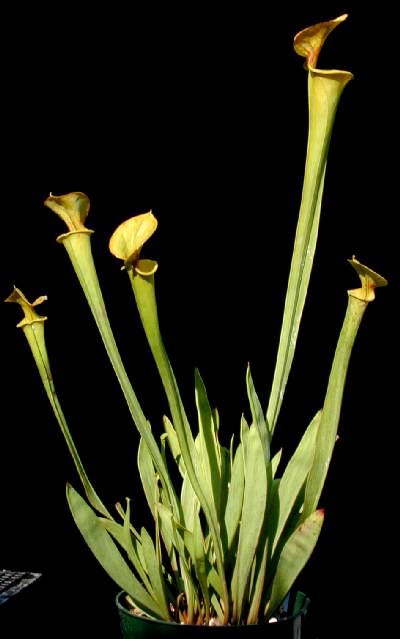 Sarracenia flava only produces one flush of traps per year during the spring. During the summer it makes phyllodia, pitcherless leaves. 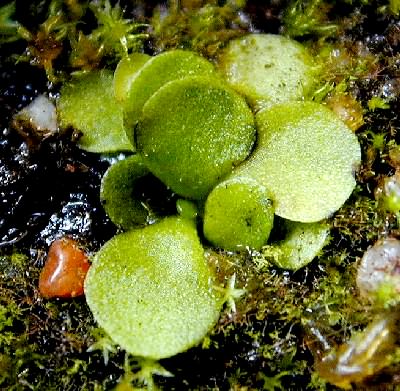 Genlisea violacea photosynthetic leaf-like protuberances. Quite often this is all you will see of the plant because the traps (the true leaves) are below ground. 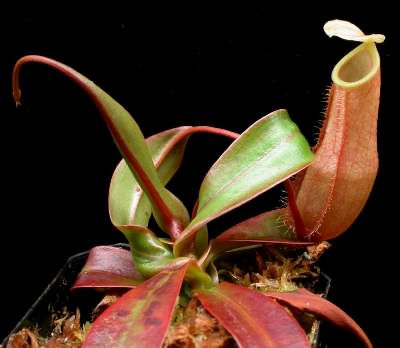 Nepenthes bellii. Notice the petioles are a substantial proportion of the leaf mass. 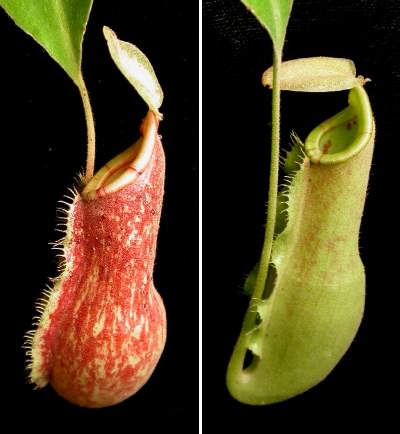 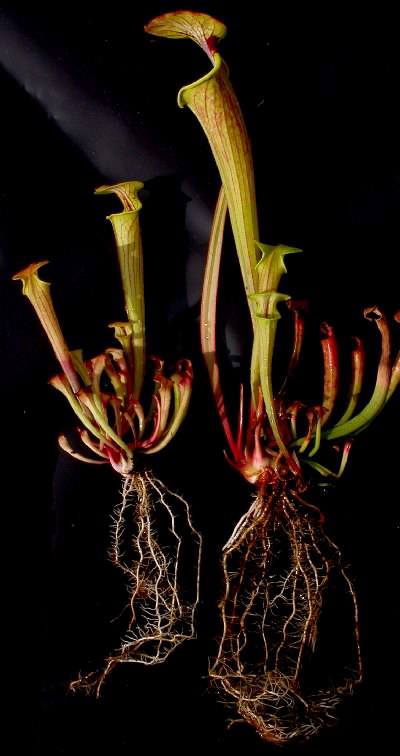