Once a carnivorous plant has procured an item for dinner, it has to have some way to turn it into fertilizer. What carnivorous plants do is very similar to what humans do with their dinner after they have eaten it. Most carnivorous plants have glands that secrete acids and enzymes to dissolve proteins and other compounds. The plants may also enlist other organisms to help with digestion. The plants then absorb the nutrients made available from the prey.

Leaf surface and sealed trap digestion generally involve only digestive enzymes and other material supplied by the plant. The leaf surface carnivores release copious amounts of fluid to smother the prey, quickly digest it, and provide a vehicle for assimilation of the released nutrients. The leaves have special glands to make this possible and may also have special adaptations to make absorption of the nutrients more efficient than typical plants.

Drosera releases digestive juices through the glands at the tip of its tentacles and absorbs the nutrients through the tentacles, leaf surface, and sessile glands. In order to do this it bends its tentacles and rolls or bends the leaf to get as many tentacles as possible into contact with the prey for digestion and to make as much leaf surface available for absorption. Its relative Drosophyllum has differently structured, non moving tentacles and doesn't use them directly for digestion. Instead it has specialized glands on the surface of the leaf that release the digestive enzymes (see Carniv. Pl. Newslett. 11(3):66-73 ( PDF ) for drawings and discussion).

The sealed trap carnivores Aldrovanda and Utricularia already have water in their traps so they only need to release enzymes. Utricularia appears to release the enzymes continuously into its traps.

The other carnivorous plants use either a mixed mode of digestive enzymes and partner organisms (Genlisea, Sarracenia, most Nepenthes, Cephalotus, some Heliamphora, Roridula) or other organisms exclusively for digestion (most Heliamphora, some Nepenthes, Darlingtonia). Part of the reason for partnering with other organisms is that the plants actually have little choice in the matter. This could also be a factor for the leaf surface and sealed trap digesters as well. The prey will have gut flora that are quite capable of digesting their host when it dies. In addition, insect larvae, frog tadpoles, and predacious protozoans will or will attempt to take up residence in water-filled traps. The plant releasing digestive enzymes and acids into the traps will help tip the nutrition balance to themselves, but there are limits.

So how do we know which plants release digestive enzymes and when? The digestive glands are so small. Hartmeyer (1997) ( PDF ) demonstrated a technique for using black and white photographic film to assay the presence of enzymes that dissolve protein. The plants use dissolved protein as a nitrogen source. The film contains silver salts in a gelatin matrix on a clear plastic backing. Proteases dissolve the gelatin protein leaving clear areas on a black background after the film is developed. The film can be laid on the leaves of carnivorous plants or drops of fluid from pitchers can be placed on the film. The tests can be done with or without stimulation by prey, salt, or yeast solutions. If you can still get real photographic film and developer, this test is easy to do.

The developed film test for protease is a quick and dirty test. Many carnivorous plants will test negative because the test is not sensitive enough, the enzymes they secrete do not dissolve gelatin or you cannot get the film to where the digestive glands are located.

Frazier (2000) ( PDF ) discussed the history and status of the studies of the Nepenthes (and Drosera) protease nepenthesin. It is not easy to study nepenthesin because it is produced in small quantities, Nepenthes pitcher fluid my be contaminated with proteases from other organisms, and it may be bound to a carbohydrate. Nepenthesin works like the mammalian digestive protease pepsin but it is more stable and works best at higher acid levels (lower pH). It may also be unique in structure, even among plants.

In a more recent contribution Takahashi, et al. (2009) studied the acid proteases (= proteinases) found in Nepenthes, Cephalotus, Dionaea, and Drosera. The species they tested had at least two different proteases each and as expected Cephalotus was different from Nepenthes and Dionaea (not all the tests worked for Drosera). They determined optimal pH and temperature, protein cleavage sites, and stability. This study and others like it help us to understand what the carnivores are doing to make the amino acid components of a prey available to themselves.

Another element that plants need from their prey is phosphorus. Plachno, et al. (2006) used an interesting technique to visualize sites of acid phosphatase activity. A fluorescence labeled phosphatase substrate is used to make phosphatase glow under ultraviolet light. All cells contain phosphatases (all cells also contain proteases) but the substrate would not normally penetrate cell walls so we can see where phosphatases are found external to the cell or otherwise are being excreted. There is a special case where cells can be actively absorbing water or other substances. They can absorb the fluorescent substrate and light up on the inside.

Plachno, et al., were able to visualized the locations where phosphatase was being excreted as well as where the substrate was being absorbed. The absorption of the substrate does confuse the issue a bit because it is hard to tell if a gland is multipurpose. It is very clear from the data that phosphatases are important to carnivores. Also there is more to understand about carnivory in Roridula and Byblis since they are clearly acting like full-on carnivores in this test.

Plachno, et al. (2009) did a study to determine how much nutrition carnivorous plants derive from their prey. They placed Drosophila flies on leaves of a number of plants for 10 to 15 days then analyzed the remains to see what remained. Presumably what remained of the fly after 10 to 15 days was what the plant did not absorb. An active carnivore should be able to remove a sizeable fraction of the nutrients from the fly. A non-carnivore would not.

Their results show that Roridula gorgonias and Drosophyllum lusitanicum extract a significant amount of nutrients from the flies while Proboscidea parviflora and Ibicella lutea do not. The actual values shown in the paper for Proboscidea parviflora and Ibicella lutea are not even close to significant—in fact most show more nutrients in the corpse!—so it is not likely a more sensitive test of this type might exonerate those species.

Takahashi, Kenji and Masao Tanji and Chiaki Shibata (2007) Variations in the content and isozymic composition of nepenthesin in the pitcher fluids among Nepenthes species. Carniv. Pl. Newslett. 36(3):73-76 ( PDF ) 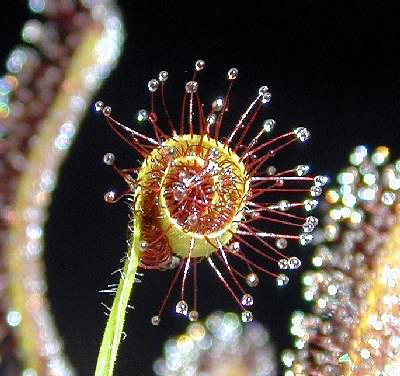 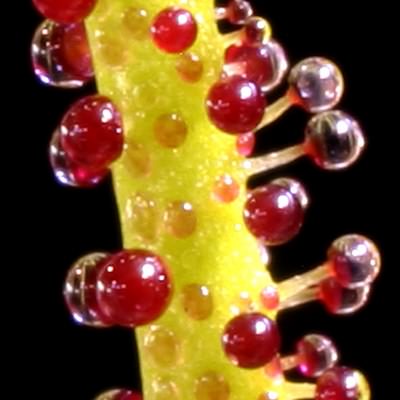 Drosophyllum lusitanicum leaf close up. The red disks on the leaf surface are the sessile digestive glands. The stalked glands are only used for trapping prey. Photo by Thomas Cahill. 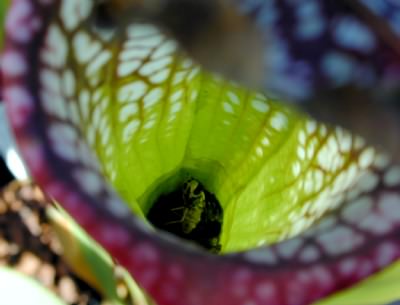 Looking into a Sarracenia leucophylla pitcher full of corpses. 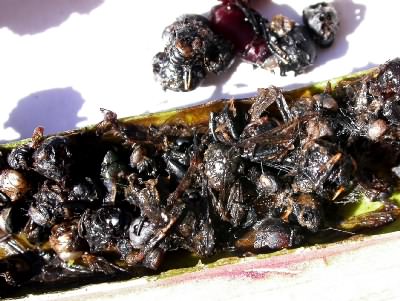 Close up of the remains of prey in a Sarracenia pitcher. The plant does not digest the chitinous exoskeleton of the insects. 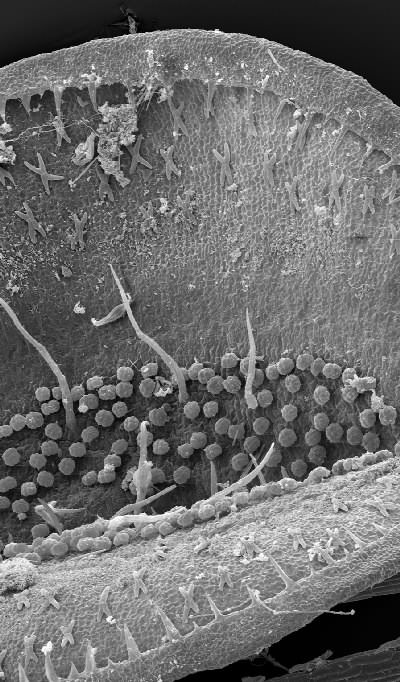 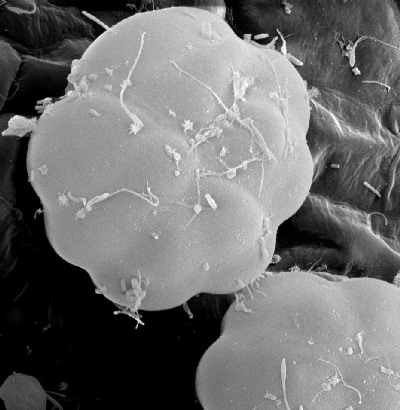 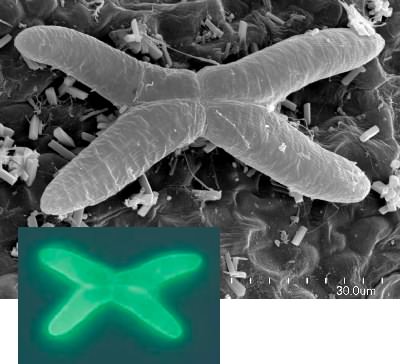 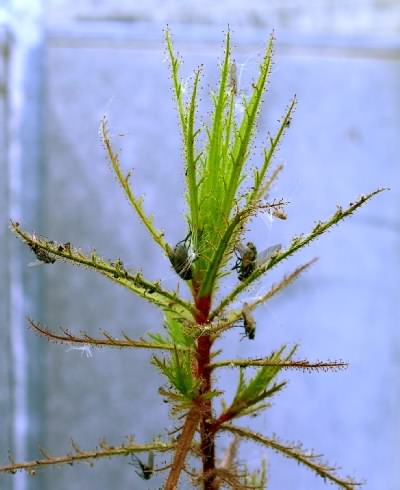