Chase et al. (2009) introduce the concept of murderous plants and include carnivorous plants as a subset. Use of the word "murderous" in this context is a slight hyperbole because it does not conform to the usual definition of the word. The dictionary definition usually has words like "unlawful" and implies killing of an individual of the same species. However, the root of the word simply implies death or causing death. Either way, the word "murder" presents an image that is quite useful in the discussion of carnivory in plants. We need a word for plants that at first glance appear to be carnivorous but in fact are not. Carnivorous plants are simply feeding themselves with prey. Murderous plants are conspicuously killing victims—or at least apparent victims—without utilizing the corpses for food.

Conspicuous killing is a key concept here. All plants are potential killers because all plants contain toxic substances to limit predation. Plant predators tend to recognize what they can and can not eat so we rarely see corpses on or around most plants. When we do see corpses, something interesting is going on. (OK, not seeing corpses is interesting too but that is not as exciting.) The plant could be killing prey for food or the plant could be just killing. 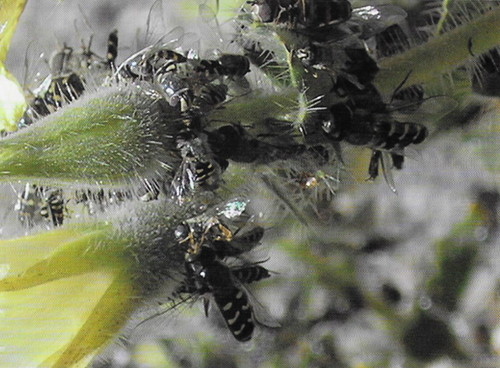 One of the best examples of a murderous plant is the desert stingbush, Eucnide urens. The plant has stinging spines ostensibly to prevent predation. Without finding a mutant plant without spines, we do not know what could eat it if the spines were not there so we do not know what the spines are protecting the plant from. However the spines do not protect the plant from getting infested with aphids. The aphids in turn attract aphid predators such as syrphid flies. The syrphid flies are killed by contact with the spines. The plant is actually killing an insect beneficial to itself. So here we have a plant, covered in corpses of a beneficial insect. Is this plant carnivorous? Nope. The plant is not deriving any nutrition from the victims. This plant is murderous.

There are a number of species in the family Martyniaceae called Devil's Claw that have attracted the attention of the carnivorous plant community because the plants were thought to be carnivorous. They are rather horrid plants that everyone needs to grow once to fully appreciate life. They are the kind of plant you want to be carnivorous. Ibicella lutea, Proboscidea louisianica, and Proboscidea parviflora have resinous& leaves that become covered in small insects. You want it to be "eating" those insects. Unfortunately, it has now been adequately demonstrated that the plants make no effort to and do not otherwise acquire nutrients from the insects they kill. The mucilage on the plant appears purely to be a predator defense. It is unclear what proportion of its victims are potential predators to the plant itself. This plant is not carnivorous; it is murderous. 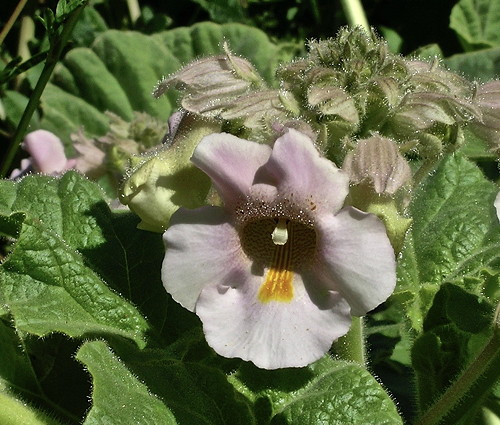 Most of the Proboscidea louisianica plant is covered with a resinous dew that smells like moldy gym socks.

Not all murderous plants target insects or other small creatures. The Andean bromeliad Puya raimondii is known for birds getting impaled on its spines. Pisonia grandis is found on coral islands and has extremely sticky seeds. The seeds stick to sea bird feathers to facilitate long distance dispersal. Sea birds can become entangled in masses of seeds and killed. More murderous plants.

The recognition that many non-carnivorous plants can trap and kill victims on their leaves is not new. Charles Darwin In his 1875 book Insectivorous Plants discussed his investigation of the species he called Saxifraga umbrosa, Saxifraga rotundifolia, Primula sinensis, Pelargonium zonale, Erica tetralix, Mirabilis longiflora, and Nicotiana tabacum. Each of these has sticky leaves that can trap insects. In spite of the fact he felt certain they might benefit from the victims he did not consider them carnivorous. It is too bad he did not think of using the term "murderous plants". He clearly understood there is a difference between murderous plants and carnivorous plants.

There have been more recent studies of potential carnivory in the sticky plants Potentilla glandulosa, Geranium viscosissimum, Petunia violacea, Petunia nyctaginiflora, and Solanum tuberosum and plants that use glandular hairs to protect their flowers Passiflora foetida, Plumbago auriculata, and a number of Stylidium species. Some of these species do appear to have enzymes in their mucous but in none of the cases do the plants qualify as carnivores because, if for no other reason, they benefit little if anything from the victims. These murderous plants have sticky leaves and other plant parts as another weapon in the arsenal plants use to protect themselves and their reproductive parts from predation. 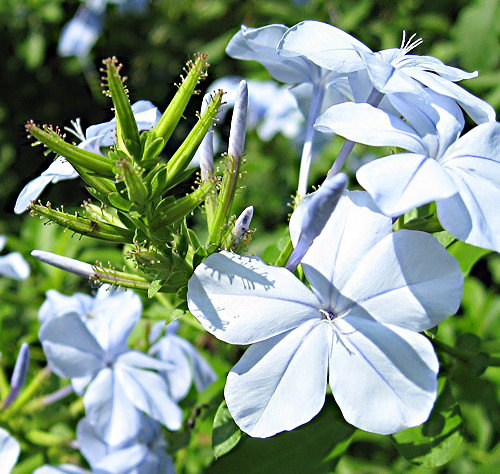 Plumbago auriculata is related to carnivorous plants but is not carnivorous. It has glandular hairs on its flower bracts that act as a predator defense.

Should some of these murderous plants be considered proto-carnivorous, semi-carnivorous, para-carnivorous, or sub-carnivorous? I think not. These terms define a plant by what it is not. The terms could also be used to imply the plant is almost at some (desired?) endpoint or on the road to that endpoint. This is placing a value judgment on the plants lifestyle.

Why, 150 years after Darwin's book Insectivorous Plants are we still discussing what is and what is not a carnivorous plant? The main reason is carnivorous plants are in a sense practicing a lifestyle and there are different views about how to define the lifestyle. Carnivorous plants are plants after all and do not do anything other plants can not in some fashion do. Other plants can move and move quickly. Other plants produce glandular hairs that are sticky. All plants produce some quantity of digestive enzymes. Most plants can absorb nutrients through their leaves. What is important to me in defining plant carnivory is not specific traits but defining the lifestyle as a whole. In this case it is the method of deriving nutrition. Any rules we make about what is and what is not a carnivorous plant would be a definition of that lifestyle. Murderous plants would not be considered carnivorous because they only have adaptations that have fatal consequences for other organisms in their environment. These plants could just deter a predator, but no, their lifestyle is to kill it in a conspicuous way.

An evolutionary biologist would approach carnivorous plants with still another point of view. They would ask how can the carnivorous lifestyle come into being and even more important how is the lifestyle maintained over millions of years in the face of shifting continents and changing climate. Plant carnivory would be a package that contains traits that are selective "improvements" such as the ability derive nutrition from prey as well as loss of function such as the inability to derive adequate nutrition via their roots. The gain of certain functions and loss of other functions forms an evolutionary trap restricting carnivorous plants to certain environments with a certain lifestyle. An evolutionary biologist would have the most restrictive definition of plant carnivory and consider a semi-carnivorous plant to be one that is carnivorous in some part of its life and not carnivorous in other parts of its life.

For a more detailed discussion please see the following article and articles it references. 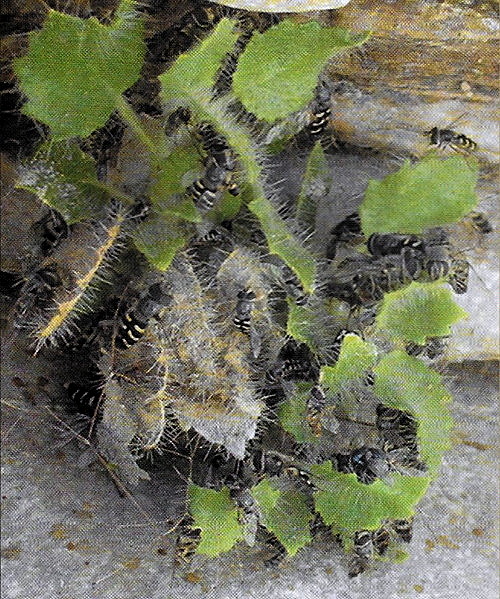 Eucnide urens with the corpses of aphid predator syrphid flies attracted to aphids on the plant. Image from Michael Metzler (2006) Carniv. Pl. Newslett. 35(4):119-121. 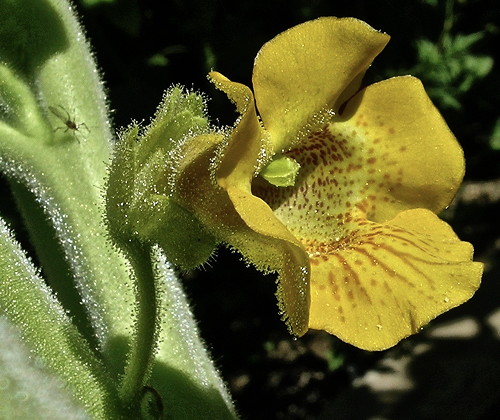 Ibicella lutea is a plant everyone should grow just to see how disgusting plants can be. If you have a life partner, kids, or pets also consider what growing this plant could do to your domestic harmony. 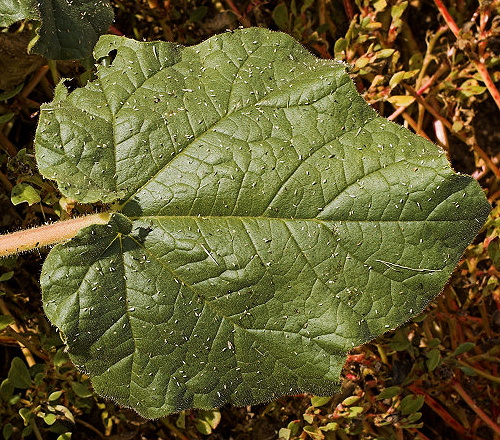 Leaf of Proboscidea parviflora with small white flies. Even if this plant was carnivorous, there is not enough nutrition in what it traps to make any difference in the energy budget for the expensive leaves. An odd thing is plants in their natural habitat can be decimated by caterpillars that spend the daytime inside the hollow stems. Photo © Barry Rice, sarracenia.com. 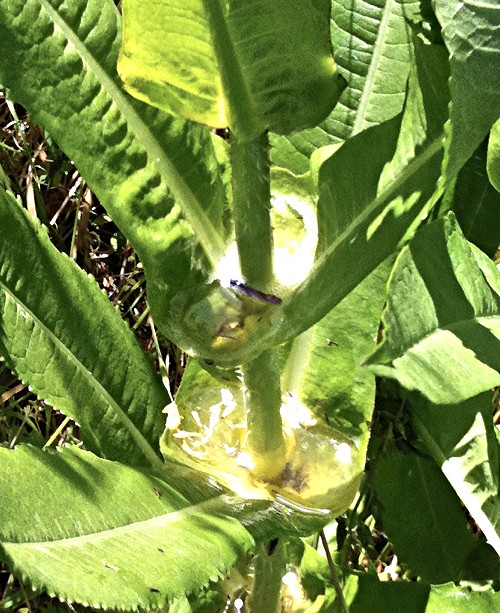 Dipsacus fullonum has opposite fused (connate-perfoliate) leaves that form pitchers that can trap potential predators. 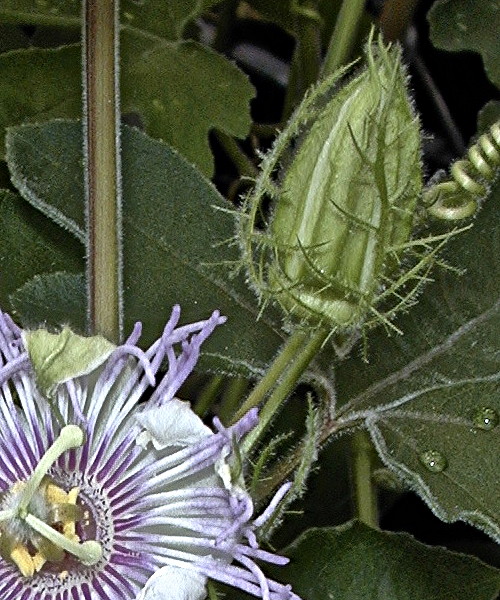 The flowers of Passiflora foetida have glandular hairs on bracts protecting the flower buds. 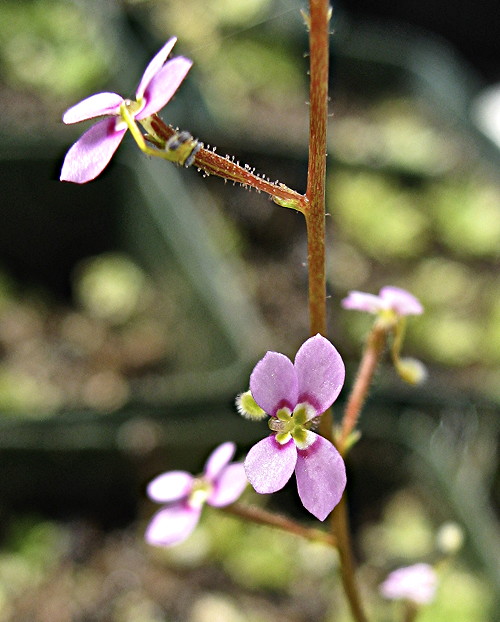