The tropical Drosera adelae, D. prolifera, and D. schizandra are about as close as you can get to jungle sundews. There are other Drosera that live in tropical regions and overlap the range of these species such as Drosera burmannii, D. indica, D. banksii, and D. spatulata, but they are not restricted to the wet tropical habitats and are definitely not jungle or rainforest plants.

There are a number of reasons there are not many rain forest Drosera. The most obvious one is rain. Rain is the bane of leaf-surface digesting carnivorous plants. It washes the prey off the leaves. Carnivorous plants in high rainfall habitats tend to have pitchers to contain the prey and digestion products. These Drosera appear to specialize in small insects that can be held and digested quickly. "Hot", high nutrient unnatural foods like dried blood worms can burn holes in the leaves.

Drosera schizandra which is from the most rainiest locations appears to be losing its carnivorous nature, presumably because it is not able to hang on to enough prey to make the production of tentacles useful even in the "dry" season. This could be because of the second bane of the jungle: ants. Greg Bourke found that any prey Drosera schizandra catches is immediately snatched by ants. The other sisters have this problem too but to a lesser extent.

Peter D'Amato has referred to Drosera adelae, D. prolifera, and D. schizandra as the three sisters from Queensland. The leaves of mature plants are about as different looking as any sisters could be but they are more closely related to each other than they are to any other Drosera. And like any three sisters, each has different growing preferences. But they are united in that juvenile plants do have similar leaves and the flowers are similar as well.

All three species are found along stream banks only in an area of coastal mountain rain forest in northeast Queensland, Australia. Drosera adelae is found only in a range of 70 km along Rockingham Bay and on Hinchinbrook Island at an elevation from sea level to at least 450 m (1500 ft). Drosera adelae likes hot and humid. Drosera schizandra is found 100 km to the north, only on Mount Bartle Frere in the Wooroonooran National Park. The plants are reported at 400 to 700 m (1300 to 2300 ft.) elevation in cool rainforest. Drosera schizandra hates hot but demands humid. Another 140 km to the north, Drosera prolifera is found only on the canyons on the eastern side of Thornton's Peak near Cape Tribulation ranging from sea level to 1300 m (4300 ft.) elevation. The available clones of Drosera prolifera like warm and humid but tolerate cool. That is it for the distribution of these finicky plants.

Drosera adelae is among the easiest Drosera to grow. In fact it can become a weed in collections because it sends out long roots that sprout new plants everywhere you do not want it. The plant grows as well in pure water as it does in all the neighboring pots irrespective of soil mix. It does best in very humid conditions but does not require the very warm temperatures typical of its homeland. Because of the humidity requirement it does not work well as a house plant unless your house is very humid. It is not as sensitive to foliar fertilizers and dried blood worms as its sisters. Like them, though, it does like live small flies such as Drosophila best. The plants will decline if they are not fed well. This species is very easy to propagate from leaf cuttings, root cuttings, and flower stalks if you dare. The plant will bloom occasionally but the flowers do not self pollinate. If you hand pollinate the flowers you might get a seed or two.

I do not know why Drosera prolifera is not more available than it is. The plant is not hard to grow. It does best in long fibered sphagnum in short pots sitting in water. It does need high humidity and appreciates being warm but does just fine at cool house temperatures. The difficult part of growing it is feeding. The leaves burn easily from foliar fertilizer and rehydrated dried blood worms. Live small flies seem best. It is propagated easily from leaf and root cuttings and flower stalks. The plant sends out horizontal flower stalks like runners in strawberries that as well as having flowers, sprout new plants. It is best to have a few pots nearby to "catch" the flower stalks so you can have new plants to replace any that decline.

Growing Drosera schizandra can be a little tricky. The plant wants it wet, humid, cool, and no direct sun. It is best grown in live sphagnum in medium to short pots constantly sitting in a small amount of water. If you have a cool greenhouse, growing under the benches is best. In a terrarium the heat from the lights might be too much for the plant. My terrariums get too warm to grow the plant in them. They are also too bright. Growing Drosera schizandra under a glass jar in a north window of house works well as long as the temperatures are cool. I find you really need to keep the temperatures below 25°C (78°F) or the plants start to decline. Drosera schizandra is sensitive to "hot" food which can burn holes in the leaves. Small flies are best. Propagation is easy from roots, flower stalks and leaves. The plant uses its roots like runners to generate new plants at a distance.

The three sisters from Queensland are higher maintenance than many other sundews. Drosera adelae's tendency to want to be in other pots than the one you planted it in can be a nuisance. You also need to keep an eye on Drosera prolifera. It isn't a plant and forget plant. And then there is the sulky Drosera schizandra. Keep it cool if you want to keep it. 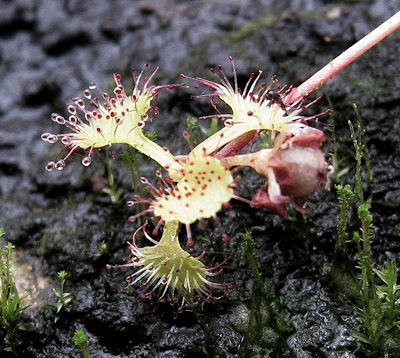 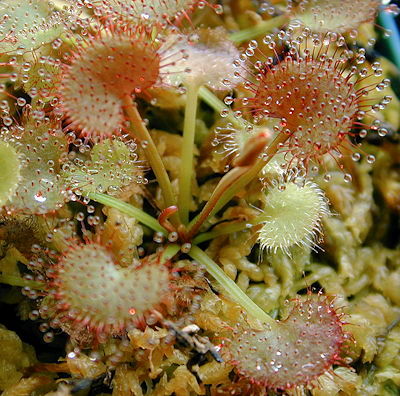 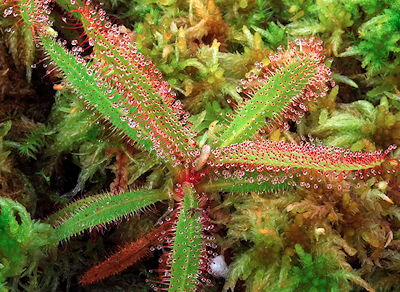 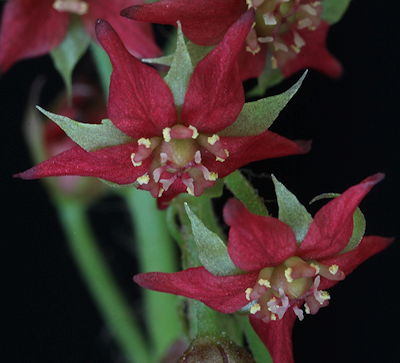 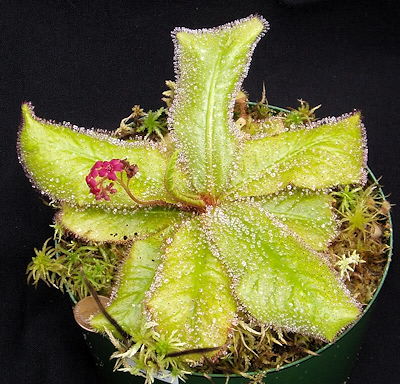 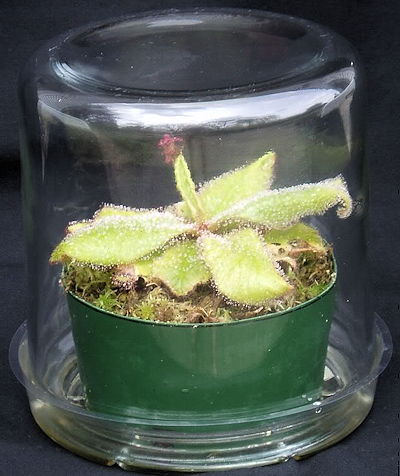 Drosera schizandra growing under a jar. Photo by RL7836.