The annual member of this complex, Drosera banksii, can be grown like the other species but you need to pay close attention to the seasons or the plant could die back before it flowers. Some people recommend growing them like Drosera indica others suggest treating the plant like a summer growing Tuberous Drosera. Drosera banksii has self-compatible flowers but you do need to hand pollinate them. It can also be propagated by stem cuttings.

There are 13 named species in the Drosera petiolaris complex although the actual number of species is quite debatable. All of the species readily hybridize and what in the wild could be considered a species or a hybrid is based more or less on the judgement of people working in the rather inhospitable regions of northern Australia. We do know that certain artificial hybrids look very much like certain named species. There is nothing wrong with that since many species are of hybrid origin. The question is whether each named species is really a cohesive extended unit or whether it is just part of a huge hybrid swarm.

These plants are also known as woolly sundews. The leaf petioles on many of the species are covered in white hairs. White hairs on leaves is a typical plant adaptation for sun protection in hot, dry locations. The hairs keep the leaf cooler and lower the transpiration rate. Since the more woolly species are more adapted to drier winter conditions that may be a factor in their cultivation.

Drosera petiolaris complex plants can be started from seed and grown like subtropical Drosera, only warmer. A temperature between 25°C to 32°C (80°F to 90°F) works best for germination. Soil is not a big issue considering that each of the species tends to be found on certain soil types in the wild. Some growers use 100% peat. An equal mix of peat, sand, and perlite works best for me. It depends a lot on your exact growing conditions. Please see Sowing Seeds Step-by-Step for more details on starting seeds and the growing guide Growing Subtropical Drosera for more information on growing small Drosera in general.

These plants are difficult to propagate vegetatively. Leaf cuttings do not work. Leaf pullings sometimes work. The new plants sprout from the part of the leaf that attaches to what stem they have. Some species will form divisions, other do not.

Adult plants are best managed if grown in small pots in trays of water. The water level can be higher in summer and lower or even allowed to dry for a few days between waterings during the winter. The most difficult aspect is maintaining warm temperatures in temperate regions. Some growers put seed starting mats (i.e. heating mats) under the trays of water or terrarium.

If you care that the plants you grow are correctly identified, make sure you get seeds and/or plants from a reputable grower. The hybrids on this page were from ICPS Seed Bank seeds where the donor listed the seeds based on the seed parent while the pollen parent could have been any other of the plants he had flowering at the same time. The flowers of the Drosera petiolaris complex species are self incompatible. You have to have two unrelated plants of the same species blooming at the same time and generally have to hand pollinate the flowers to get seeds purely of that species. In getting plants make sure the grower did not match a hybrid to the species that looks most like the plants they have. 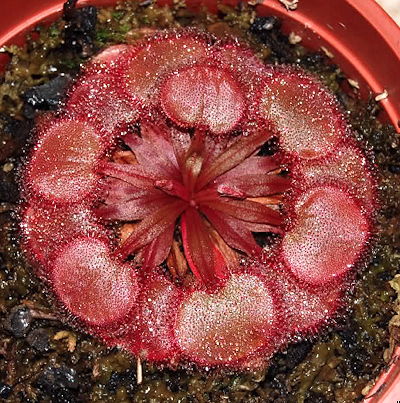 Drosera falconeri. Some people get excited about this plant because it looks like Dionaea muscipula. It is related to Dionaea but no more than any other Drosera. Photo by Mach Fukada. 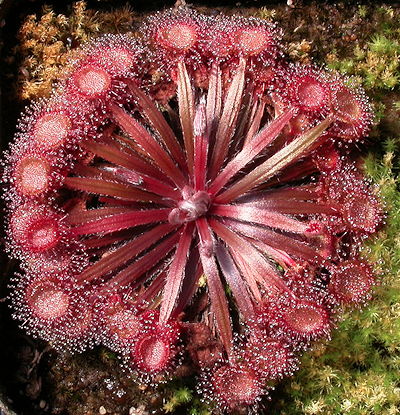 A Drosera falconeri hybrid that looks a lot like Drosera kenneallyi. 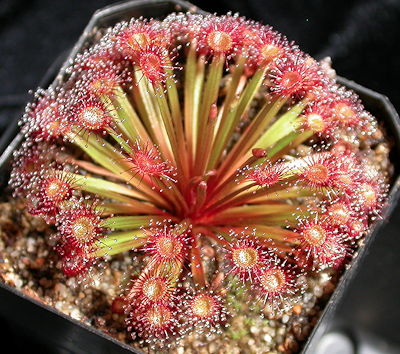 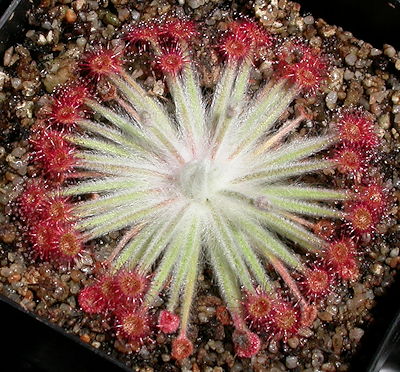 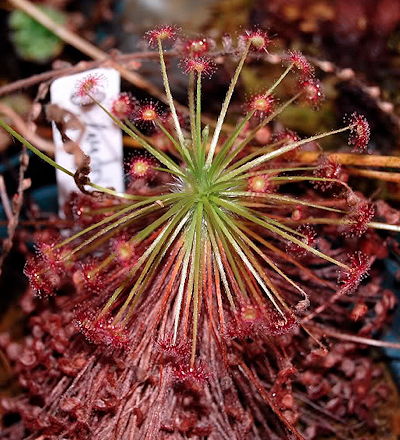 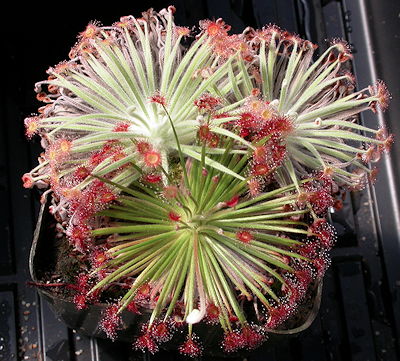 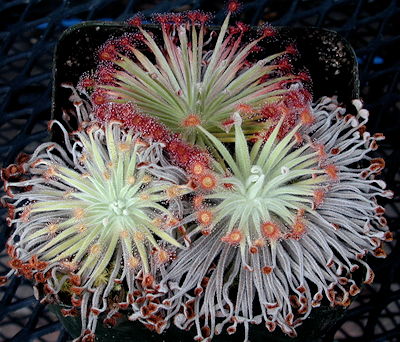 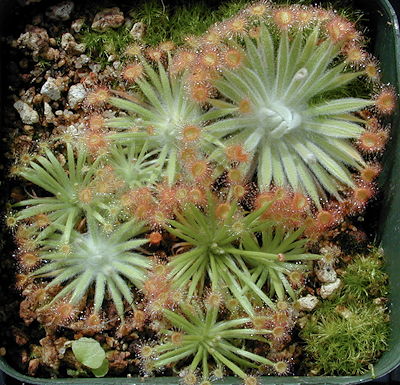