The easiest and for some hybrids the only way to propagate pygmy Drosera is via gemmae. If the plants are getting sufficient seasonal light cues they will produce gemmae in the late fall and early winter. When I lived in California I grew them outside year round so they would grow "naturally", blooming and producing gemmae. The plants in my terrariums did not produce gemmae. Please see Growing pygmy Drosera for more information on growing pygmy Drosera. 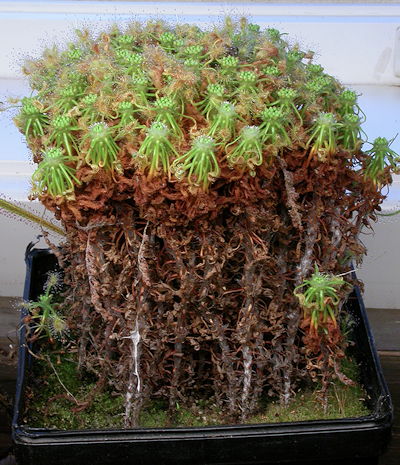 This Drosera scorpioides has been a #1 square nursery pot for three years and it is time for renewal. The plants can not be transplanted, stem cuttings do not work, so the only option is to start over in a different pot from the gemmae. 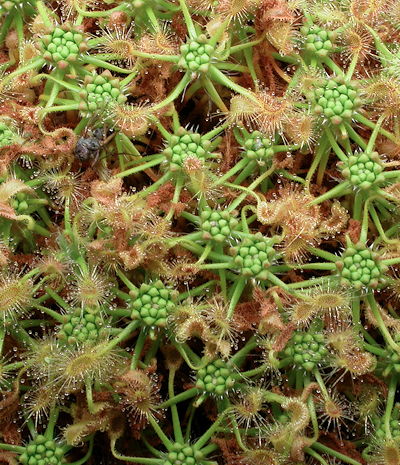 As you can see in this closer view there are plenty of gemmae to start a few new plants and have some extra for friends. 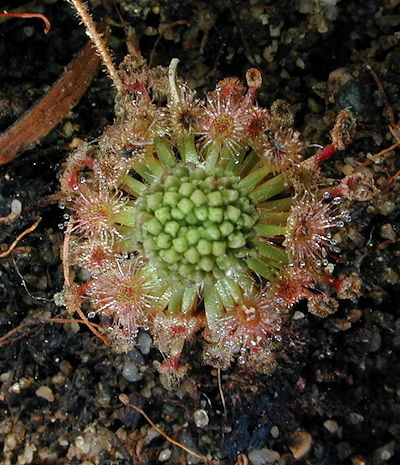 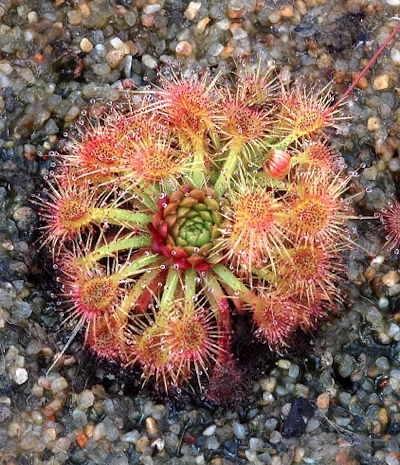 Drosera allantostigma gemmae are a little trickier to harvest. They are thinner and smaller. Many will get caught in the leaves. 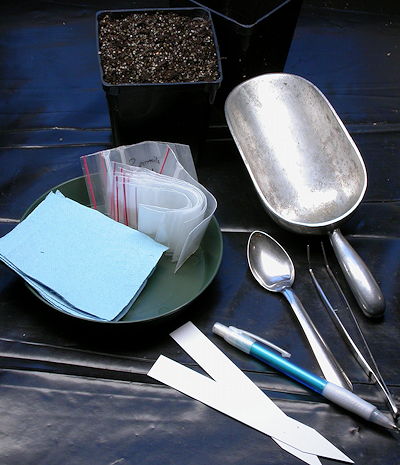 Before we get started we need to assemble the tools.

We need tall pots with a peat/sand mix. Please see Peat, Sand, Perlite for information on soil mixes and Sowing Seeds Step-by-Step on how to prepare the pots. For soil I recommend peat with 50% to 75% sand or perlite. I have tended to use more sand or perlite to cut down on moss. Once the plants are established the soil surface can be completely dry all the time.

The pots must be tall pots. These are standard 3.5 inch (9 cm) square, 4 inch (10 cm) tall pots normally used for small perennials in nurseries. Choose a pot where you want the plants to live the rest of their lives. Pygmy Drosera have one very long, very fragile root and generally die if their root is broken so transplanting is not recommended.

You will also need something to collect the gemmae in, I use a kitchen scoop; a pointed instrument, I find a forceps convenient; something to put the gemmae in until they are planted; labels and a #2 pencil. The spoon is for leveling the soil.

We will get to the paper towels and plastic bags later. 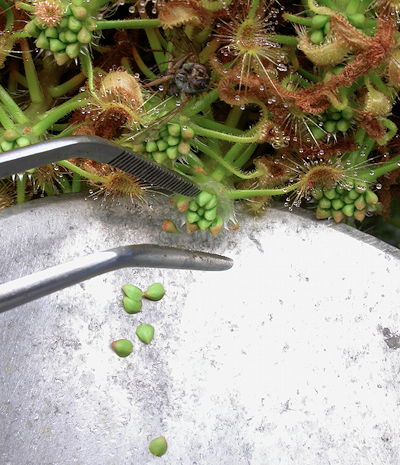 There are many methods for collecting gemmae. None of them are perfect. Some methods work better with different species. You need to find the one that works best for you.

I like laying the pot with the plants on the side and using a forceps tip to knock the gemmae into a kitchen scoop. If the gemmae get stuck to the leaves I use the two tips slightly apart to comb the gemmae off the leaves into the scoop. I do this away from the pots with the other mother plants because some of the gemmae do go flying.

I have also laid the pots on their side in a plastic box and caught the gemmae in the box. It is best to use a paper towel to absorb any water that leaks out of the pot into the plastic box. Wet gemmae are a little hard to deal with. You also get sand in the box which can be a nuisance.

Another common method is to use the tip of plant tag or a bamboo skewer dipped in water to dislodge and hold the individual gemma. I do not have the patience for this method. For species such as Drosera scorpioides with large thick gemmae it does not work well. For species like Drosera allantostigma with thinner gemmae it does work after a fashion.

Another option is a gemmae vacuum. droseragemmae.com tells how to make one. 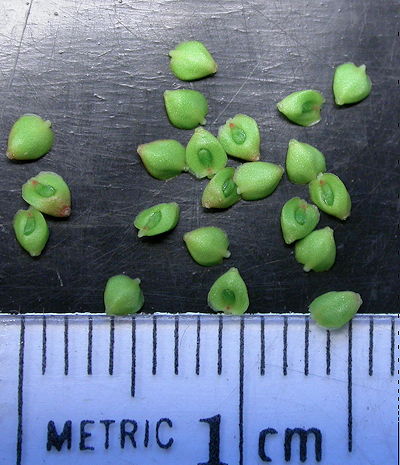 Drosera scorpioides gemmae close up. A gemma is modified leaf with a small growth bud/plant in its palm. The growth bud consists of small leaves protecting the growth apex and the red stub of the new root. 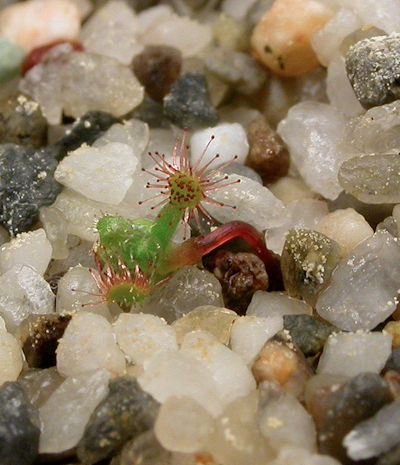 A few weeks after planting that red stub of a root will grow into the soil and the small leaves will look like real Drosera leaves. This is Drosera barbigera. 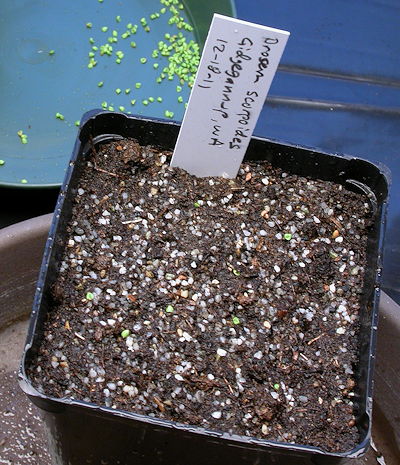 Now we are ready to plant the gemmae. In your pot individually place the gemmae no closer than 1 cm apart. Remember the plants will have to live their whole lives where you put the gemmae so space them how you want them to be forever. Put them closer if you like a mass planting, farther apart if you like to see the full form of each individual plant.

At this point you can lightly spray the soil surface with water to settle in the gemmae, or... 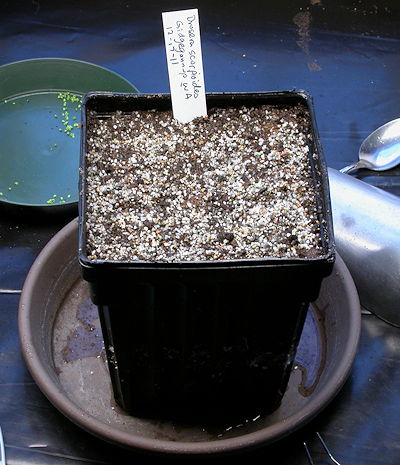 sprinkle a thin layer of sand over the soil surface before spraying with water. I prefer putting the sand over the gemmae to hold them in place and to keep them from drying out. If you immediately put the pots into a terrarium this step is not necessary. These pots are destined to be outside. 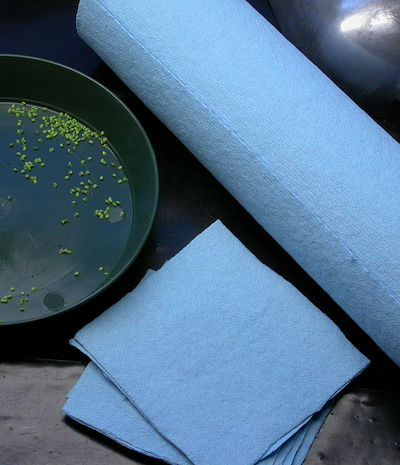 Chances are you will have more gemmae than you have room for plants. The solution is to send the extras to your friends.

To mail gemmae I put them in damp paper towels in small plastic bags. I use the blue shop towels because they are heavier weight and do not mold as easily as kitchen paper towels. I cut each towel into nine squares. 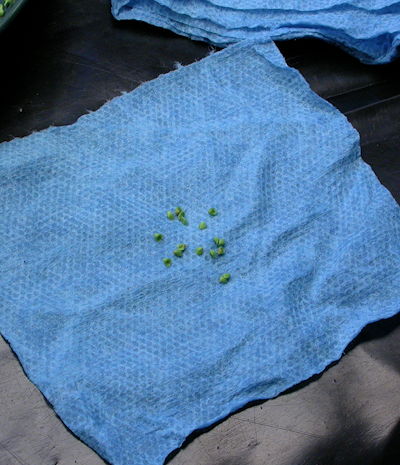 You need the paper towels to be damp. Get them wet then squeeze out the excess water. Do not get heroic squeezing out the water but do squeeze them. Then put the gemmae in the middle of the towel square.

I have had people send me gemmae in a plastic bag with nothing and with a dry paper towel. The gemmae were dead on arrival. Remember these are little plants. 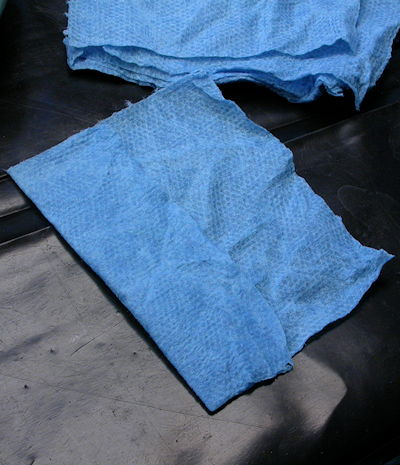 Fold the paper towel in thirds. 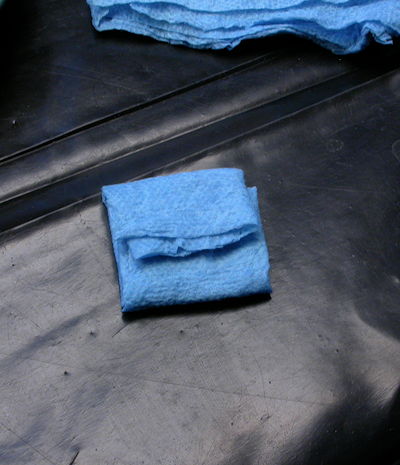 Turn it over and fold it in thirds again. This will give the gemmae maximum protection. 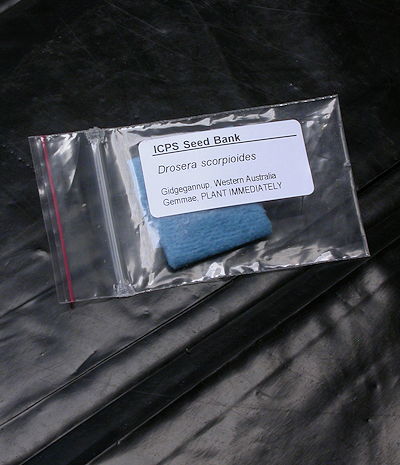 Put the folded paper towel with gemmae in a clearly labeled plastic bag for shipping in a padded envelope or small box. 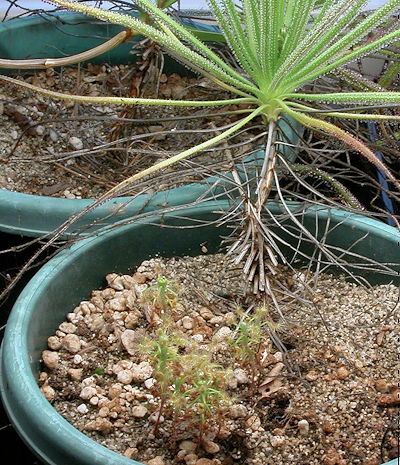 If you still have gemmae left over, toss them into pots of other plants. These Drosera scorpioides are growing with Drosophyllum lusitanicum, a non-bog plant.