History of CPN: the second 25 years

The second 25 years of Carnivorous Plant Newsletter began in 1997 with Joe Mazrimas, Jan Schlauer, and Barry Meyers-Rice as editors, Steve Baker continued to do layout, and Kandid Litho was the printer. With the inclusion of Jan Schlauer in Germany via the internet, editorial management of CPN became international as well as electronic.

As the internet became more available worldwide, the content of CPN shifted away from chatty newsletter-like content to more curated and edited journal content. News & Views and other communications from the subscribers migrated to e-mail list servers, then internet forums, and now to Facebook and other social media.

What there was a continuing need for is a place to publish technical, scientific, and taxonomic articles in addition to the general interest articles and cultivar descriptions. It was not as if the editors made decisions about shifting content. Two things happened. First, the balance of submissions shifted to more technical article submissions and fewer general interest submissions. Second, the editors spent more time working with authors to improve their manuscripts. For scientific and taxonomic articles this meant full peer-review as practiced by scholarly publications. The masthead of the scholarly articles initially said "Technical Refereed Contribution". Now they say "Peer-Reviewed Contribution" to make it clear that experts on the topic have checked the articles for problems like misstatements and data analysis errors.

As we entered the internet age, it became imperative that all current and back issues of CPN be available in digital format. The editors of CPN were printing at least 500 extra copies of each issue to make sure the content would be available in the future. The actual monetary costs and volunteer time of stockpiling and shipping printed back issues was not sustainable. In 2000, Carl Mazur started a project to scan all the issues of CPN and make them available as PDFs. David Conner and Bob Ziemer completed the project in 2006 and Bob subsequently created PDFs of individual articles. This project was not exactly a slam dunk because of the huge amount of content to be scanned and some of material to be scanned was not exactly in pristine condition. Bob Ziemer wrote an article describing the process in more detail in the March 2009 issue of CPN (PDF).

Parallel to the scanning project, John Brittnacher headed up a project to create an index of all CPN content. Tim Topoleski and Mike Wilder did much of the indexing until Bob Ziemer took it over when he became the managing editor of CPN. The scanning and indexing projects culminated in making all issues of CPN available in PDF format to ICPS members first on CD and later on DVD, and for download at the ICPS membership website. The individual articles were available after an embargo period, first on the main ICPS website in late 2002 and starting in 2017, on a dedicated website, cpn.carnivorousplants.org. Articles can be discovered by searching the index, browsing issue contents, or checking lists of species or cultivar names published in CPN.

In 2009, editorship of CPN started shifting to a new model where there is a managing editor and stable of content editors. Stephen Davis became the managing editor of CPN while Jan Schlauer and Barry Rice became science editors, Tony Gridley and Bob Ziemer became general editors, while Suzanne Hedderly and then Ken Gumiran did layout.

Printing and distribution of CPN shifted to Allen Press starting with Volume 39, No. 3, September, 2010. Allen Press is a specialist in scholarly publishing. 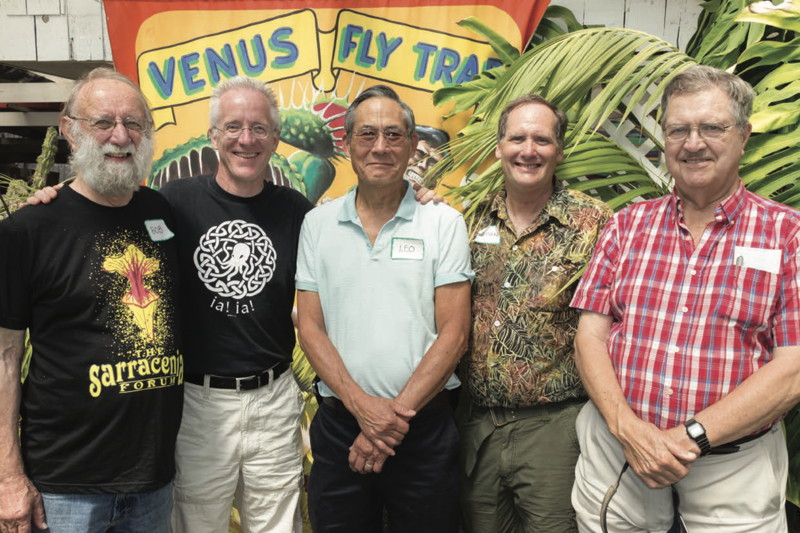 "As the President of the ICPS, it was my pleasure to ask Rick about his involvement with the ICPS and his interest in carnivorous plants."

"Yes, it is twenty-five years since you received your very first issue of Carnivorous Plant Newsletter (CPN), from its first days a steady source of information and delight for all of us strange people who seek the most unusual amongst the (only seemingly) most peaceful creatures. ... But now, Don Schnell has decided to retire from his duties as a co-editor of CPN. ... Barry A Meyers-Rice and I have been appointed as successors to fill the gap Don leaves behind."

"Together we will do our best to fill Don's waders. And while that editor emeritus is no longer at CPN's helm, his influence is indelible."

"There is one and only one way to change the newsletter's content--readers must contribute! It is that simple!"

"I am excited to announce that the International Carnivorous Plant Society has ventured onto the world wide web with our own domain name! To see what is on the site already, direct your web browser to http://www.carnivorousplants.org and look around."

"this will be the last issue of Carnivorous Plant Newsletter that will be printed while one of the founders of the ICPS is still active in the organization's leadership. After helping lead the ICPS for 29 years, Joe Mazrimas is stepping down from the board of directors."

Announcement of the CPN online index to help find articles in printed issues prior to the PDF articles being online.

"I look back at the previous ten years and see many changes have occurred in the ICPS and Carnivorous Plant Newsletter, and in general they have been for the better."

"... after about 1.1 decades of editing Carnivorous Plant Newsletter (CPN) I am stepping down from duty."

"As the new Managing Editor of CPN I want to acknowledge and thank Barry Rice, Jan Schlauer and Steve Baker for over a decade of incredibly hard work in bringing CPN up to the professional standards we see today."

"As the new Managing Editor of CPN, I want to thank Stephen Davis for managing the past 5 issues of CPN." 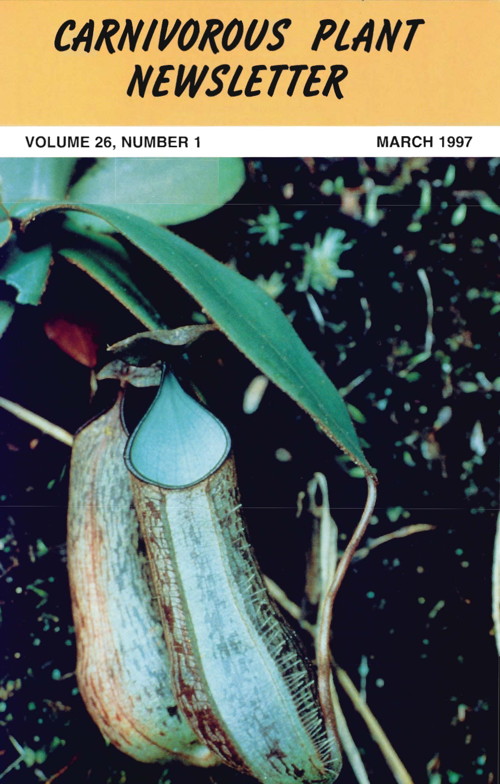 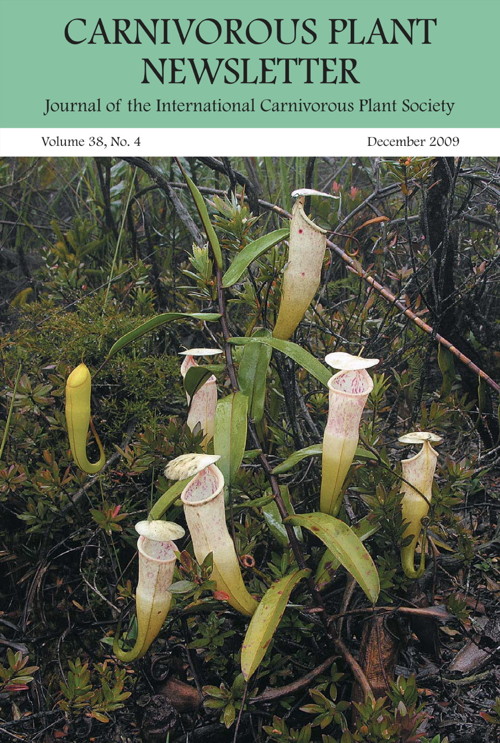 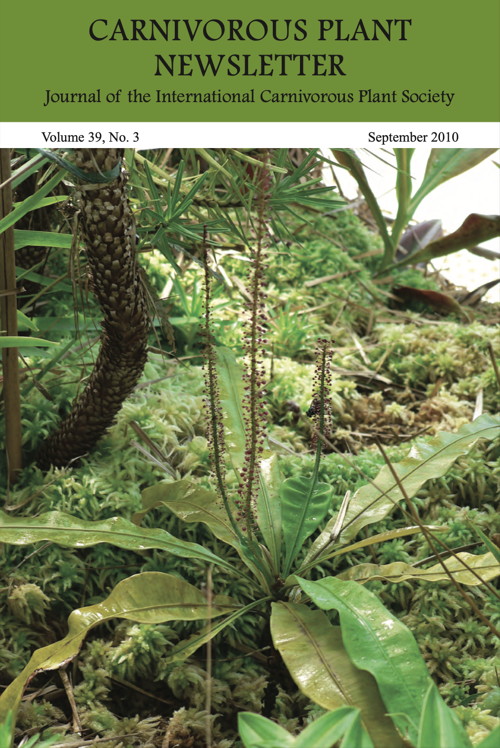 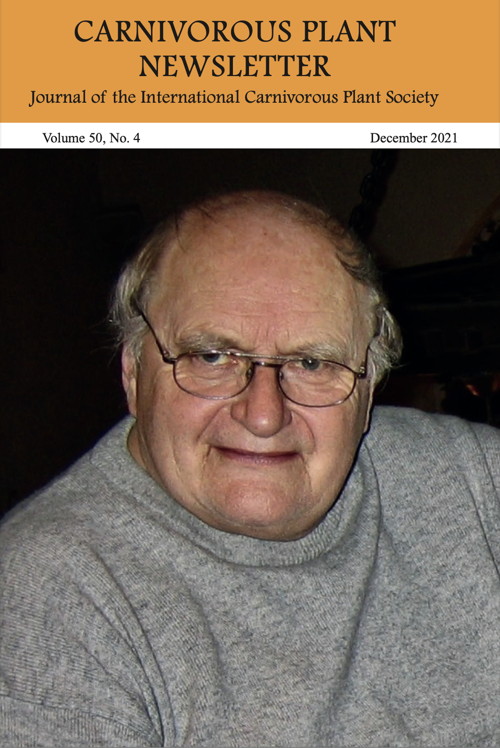