The US Forest Service managed Butterfly Valley Botanical Area is located in the northern Sierra Nevada, 10 km north of Quincy, California. The botanical area was created in 1976 to protect the unusual diversity of rare plants found at this 1150 m (3800 ft) mid-elevation site. The botanical area is known for its mosses, ferns, orchids, lilies, and of course a fen containing Darlingtonia californica and Drosera rotundifolia with a pond containing two species of Utricularia.

Botanical Areas are special, federally protected sites usually managed by the US Forest Service. Collection of plants and planting of plants is prohibited. Other typical forest uses such as driving vehicles off established roads are also not allowed. And the Forest Service asks that visitor be careful not to damage plants. But other than that, the US Forest Service wants people to visit and see the plants in the Botanical Areas. Our National Forests are considered multi-use and Botanical Areas are the (very few) places set aside for plants as plants. They are places where you can see special plants in their native habitat.

Between 1985 and 1990 Drosera x hybrida was planted out in the Butterfly Valley Botanical Area fen by carnivorous plant enthusiasts. This plant is a hybrid between Drosera intermedia and Drosera filiformis. It has only been found in the New Jersey Pine Barrens and there is only one known established population of the plant there. It is very rare in the wild but has not been uncommon in cultivation since its rediscovery in 1974.

Initially the Drosera x hybrida plants in the Botanical Area were thought to be Drosera anglica which resulted in erroneous reports of that species there. The district Forest Service botanist regularly checks the fen for exotic species and has removed multiple Sarracenia plants over the years but was not sure what to make of the long leaved sundew. He knew enough about carnivorous plants to know it was not Drosera anglica.

In 2004 the US Forest Service district botanist contacted Barry Rice, the ICPS Conservation Director and Invasive Species Specialist for The Nature Conservancy to inquire about the unknown sundew. In September 2004, Dr. Rice and John Brittnacher met the USFS botanist at the Butterfly Valley Botanical Area to see the plants. What was immediately striking was the length of the scapes. The scapes were reminiscent of Drosera tracyi scapes but those leaves were not Drosera tracyi or even Drosera filiformis leaves. Examination of the seed pods on the scapes indicated the plants were effectively sterile which indicated the plants were probably a hybrid with Drosera x hybrida most likely. But the plants themselves were more robust than any Drosera x hybrida we had seen. The plants were isolated to a small section of the fen and none were apparent farther down the drainage. So the situation at that point was not thought to be critical.

Samples of the plants were brought back to the University of California, Davis, Botanical Conservatory to grow next to a known Drosera x hybrida clone. The Butterfly Valley Drosera x hybrida turned out to be more robust than the other clone but growing in hot and dry Davis they were not nearly as robust as they had been in the mountain fen. The Drosera rotundifolia at the Butterfly Valley Botanical Area were also more robust than plants from seed collected there so there might be just the right nutrients and growing conditions ideal for temperate Drosera.

Based on the confirmation by Dr. Rice that the sundew in the botanical area was exotic, the US Forest Service removed all the plants in 2007. The introduction site and the rest of the fen is now checked regularly by the USFS as part of their effort to remove and destroy any and all exotic plants in the Botanical Area. The whole point of the Botanical Area is to showcase native plants in their natural habitat. 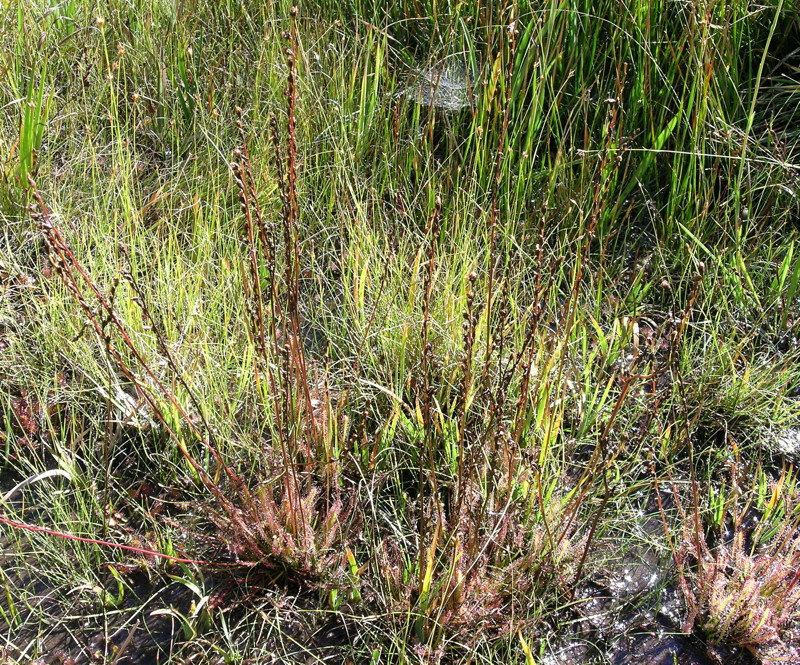 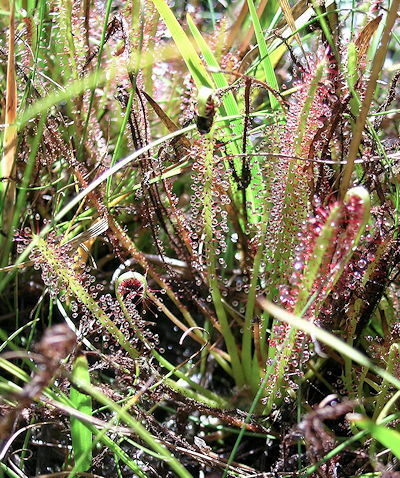